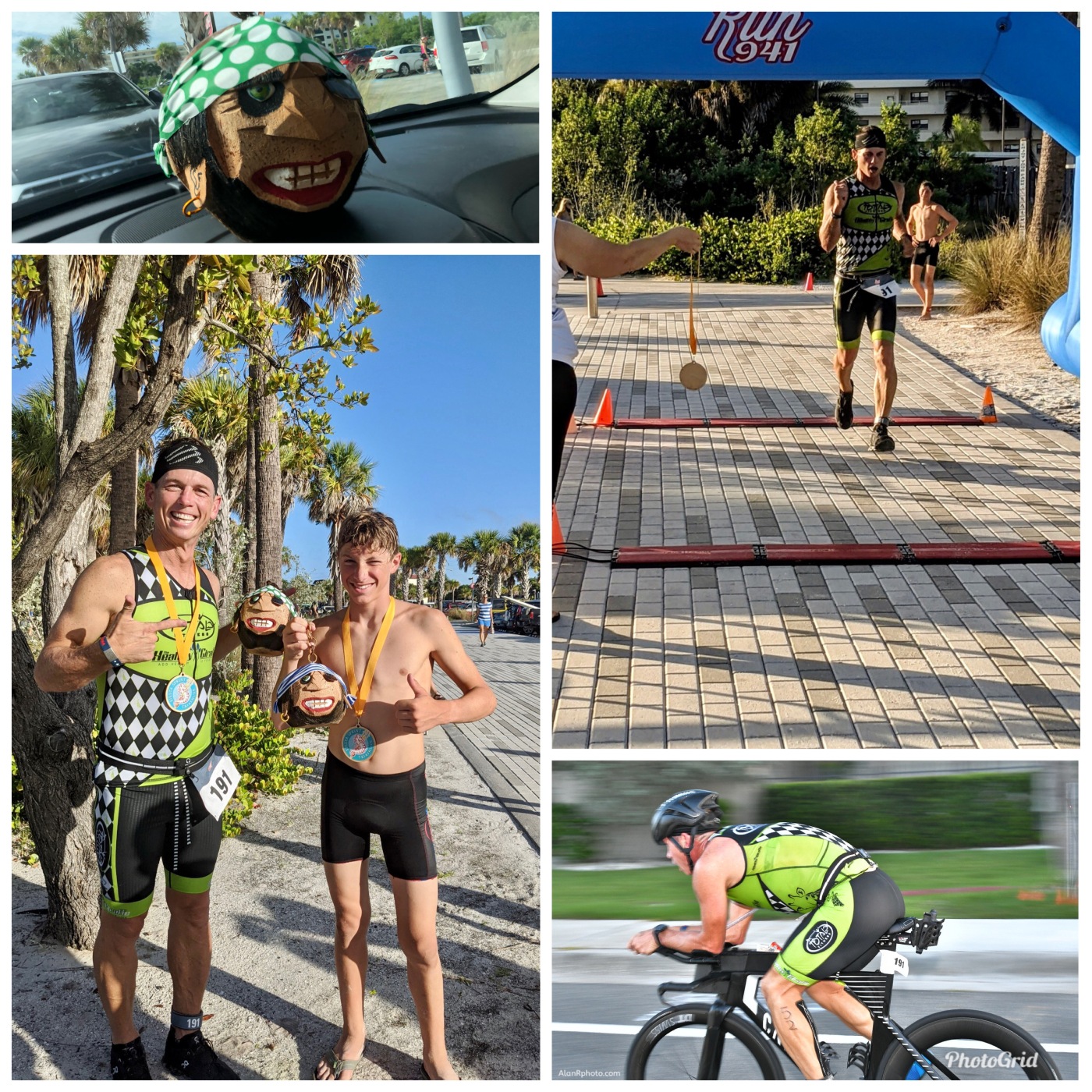 Yesterday was a much anticipated day. After COVID-19 cleared the racing schedule since March, Sunday was my first race and it simply felt great to be on a start line again. With each race continuing to be in jeopardy of being canceled or postponed I now have contingency races for each of the ones I have planned leading up to my two big targets in October and November. This one, the Siesta Key Triathlon, was my first of three tune-up races.

Since my last race in March I’ve been working on an injury that set me back but gave me an opportunity to be extra patient with all of the summer races canceled or postponed. Working with Dr. Gerard Bogin, we adjusted my treatment and progression plan after I was continuing to have a few issues but on the last reset things began to fall into place.

Fast forward to last week and my training had progressed to the point where my cycling was getting strong while my run was still in a build phase with a long way to go. The run had to be completely shut down twice over the summer so it is lagging behind the bike progression. This race in the grand scheme of things was not important but important. It was a tune up race serving the purpose of going through race conditions and to test my current fitness. I have to say for a tune up race I was really excited about it. The long layoff of not racing was a bit challenging.

My brother asked me Saturday what my goal was for the race. It was simple – go all out 100%. I knew in my head what my body was capable of so even though my run pacing would be off a bit I would still go 100% with what I had and see what adjustments I would need to make coming out of the race.

I love race mornings and I’m a morning person so it was easy to get up when the alarm went off at 3:00 AM. I made the one hour and 15 minute drive to Siesta Key Beach and was the first to get my bike set up in transition. It’s a peace of mind thing for me to be there very early and have the bike set up.

I went through my typical pre-race warm up and headed to the beach for the start of the race. There I met Dylan and Lauren Nolan as Dylan was getting ready to start the Aquathon (swim-run) race. My race, the duathlon sprint, was a 1 mile run on the beach, 11 mile ride, and a 5k run back on the beach. My race started and after a quarter mile I settled into a good pace. When making the u-turn at the 1/2 mile mark I found myself leading a tight pack of five competitors. I was going a bit faster than I was targeting for the first run but it felt sustainable so I continued with the pace.

When we went in and out of transition to the bike course I found myself still leading. This is where a bit of race strategy went through my mind. Four of the five men I knew were in there early 30s based on pre-race intel. Since they were that tight on me coming in off the first run I hypothesized that the combination of me not having the volume of training in my run legs yet and they being in their 30s they could possibly have much fresher legs than I for the final 5k run. In a sprint race it’s an all-out speed effort so even though my plan was to hammer the bike as hard as I could, I was thinking I really needed to put the hammer down to create a larger gap heading into the final run.

We had two u-turns on the bike course where I could see them. The first was at the four mile mark and the second around 9.5 miles. At each point the gap was growing and at the last sighting I was estimating I had about a three minute lead.

After a quick transition I headed back out to the beach for the final run. When I made the u-turn at the 1.55 mile mark I didn’t see the men but I did see one of them at about the two mile mark and he looked younger than I remembered and really fresh. That kept me pressing forward. At mile two was when my legs had enough and were telling me they were out of gas. I just don’t have the run miles in me now to finish a race strong and I knew that going in.

When I made the turn to head back to the transition area where the finish line was I was really struggling to tread through the soft sand. I saw Dylan who had already finished his race there waiting for me. He was running and cheering me to make the final push…what a great young man! I snaked through a winding path and at one point there was an angle to take a quick peak back to see if anyone was behind and on this day there wasn’t anyone. I took the final left turn leading me to the finish line.

Immediately crossing the finish line I felt really happy with my effort both physically and mentally. I was in the game and gave what I had. When the guy came in behind me who looked younger than I remembered, I asked him if he was in the duathlon and he said, “no, triathlon.” So the person who was pressing me wasn’t in my race. He was super helpful to me however as I continued to press. You can never make assumptions and he pushed me to continue hard to the end.

Dylan quickly made his way over and I asked if he had won his race. His results were still coming in as they had multiple waves but quickly we identified he won his race too. We had another racer in the Aquathon, Jeanne Fine, who won her age group so it was a great day for Team Total Fitness. I love hearing Dylan explain his race details and accomplishments so we did that for a bit before taking some pictures and receiving our awards…pretty cool…check out the photo.

I had the rest of the day to reflect. No surprises from the race. My bike is ahead of my run and I was happy with the consistency of power throughout the ride. My first run was faster than I anticipated so I was really happy with that and my second run was a survival exercise which I anticipated as well. It confirmed where my fitness currently was and the mountain of work ahead to be ready for October but I am where I need to be currently.

The other reflection point and this was felt immediately after the race was the appreciation of the race director, volunteers, and sheriffs. I walked around thanking as many as I could for enabling us to race. Not only did we have COVID-19 to wrestle with, earlier last week there was a chance the tropical storm and now hurricane, Isaias, was going to impact us. For an August morning, it was absolutely perfect for a race.

I celebrate with team on this day and keep moving forward on the fabulous journey to get better each day. Next race which is a recent change due to another postponement will be, Game On! Key Largo Triathlon, August 30 where I will have an opportunity to race an olympic distance duathlon which will closer match the race in October so another great test ahead. Come join the fun if you aren’t already!

Thank you Lauren Nolan for the race pictures –