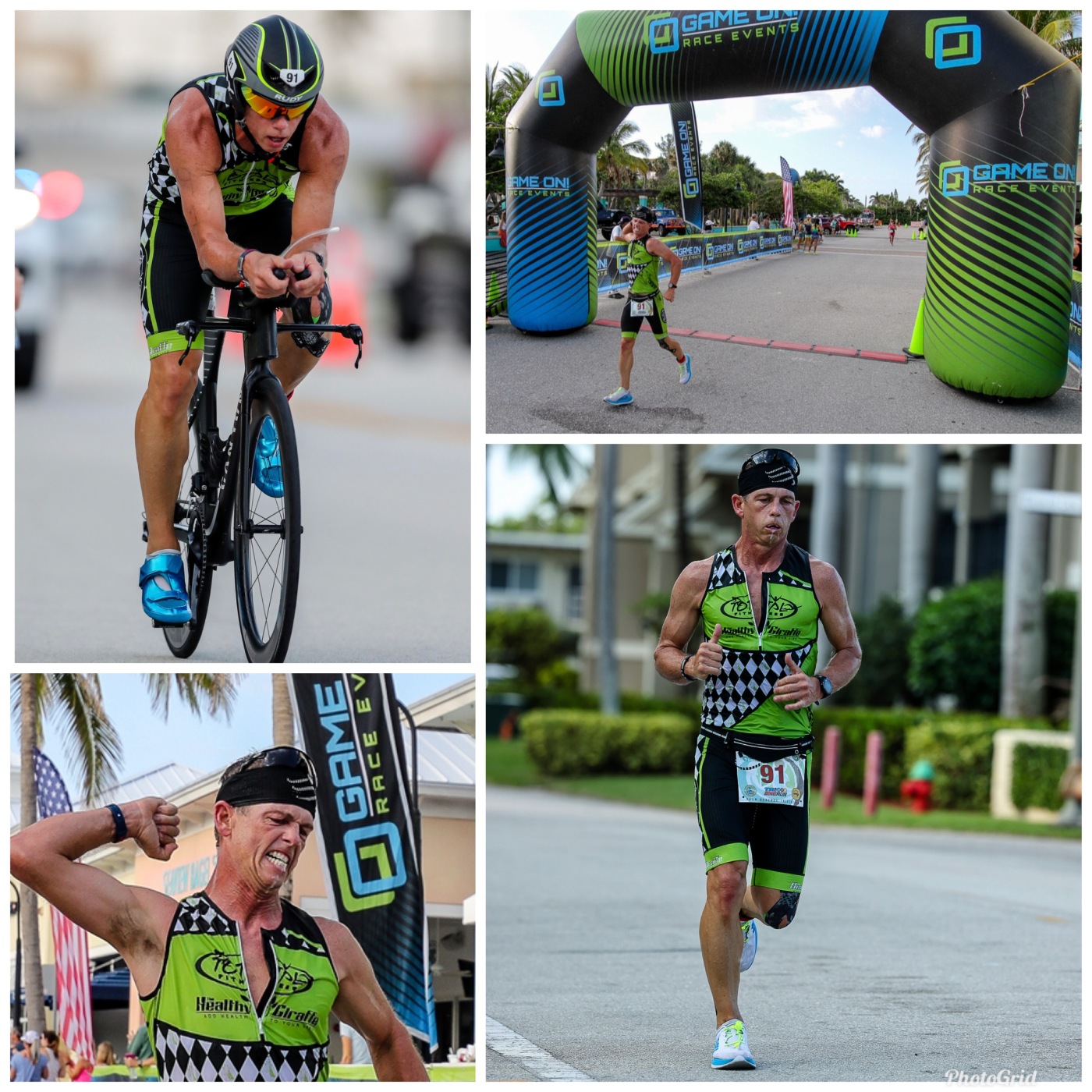 Yesterday I completed my final tune-up race in Singer Island (West Palm Beach), Florida in preparation for the USAT Duathlon National Championships later this month and it tested me in all aspects. Here I will share my experience racing the Sprint Distance Duathlon at the Game On! Palm Beaches Triathlon.

This race served a couple purposes when I scheduled it. It was three weeks before Nationals which I prefer to race from a timing perspective and it was Sprint distance where I needed to enhance my 5k run coming off the bike. When I searched for races this was the one for the weekend and I was pleased with the location. I raced a triathlon there in 2017 and it brought back memories of the Blue Heron Bridge. It is quite challenging and is placed at the end of the bike course and the beginning of the run course with both legs consisting of up-and-overs with an immediate u-turn and then back up-and over continuing on…

I arrived Saturday afternoon to pick up my packet and then drove the course to gain familiarity. Some of the memories came back and some parts of the bike course didn’t register at all. After a rice and bean salad bowl for dinner I prepared all my gear for the morning and rested.

Race morning came around quick as the 3:30 AM alarm went off. I arrived to the course early, pumped the tires, and set up my transition area. I scoped out the entrance and exit to and from transition and looked at the start and finish set up. My biggest concern during warm ups was there were no porta potties. They only used the public restrooms in which they had two facilities with a total of six stalls for the gentlemen. My tip here is eat more fiber…the animal products will bind you up and slow you down on the toilet and the race…I think I’m going to suggest time limits for the restrooms and porta potties as well…ha!

As I approached the start line a young gentleman who I guessed was around 14-15 years old stood next to me and he looked fast. There were a few other people I had my eye on as well and that was it. I had my race plan and knew what I wanted to accomplish. My thought with the young man, Olie, was if he was fast on the first run I would aim to try to keep it as close as I could, gain ground on the bike and then hold him off on the second run. Again, I had my race plan but it’s always engaging for the mind to play games and think with a racing mindset in addition to executing the plan.

The horn went off and Olie and I jumped out together and hung side-by side for about 100 meters when I was anticipating him to take off and he didn’t. He slid behind me but I couldn’t hear him so I was curious when we got to the half mile turn-around point where he would be and when we got there he was right behind me. I was running slightly ahead of my planned pace but I was laboring. My quads were heavy and that was simply from the large training load I’m currently in. On the plus side I was running fast, it just felt like a lot of work. When we came into transition at one mile he was right behind me. I was five seconds faster than my goal pace so I was pleased with the effort.

When we left transition Olie slipped in front of me as we then hopped on our bikes for the short 10 mile course. At this point I was thinking a few things. This young man is a fast runner who has legs that may be a bit fresher on the final run due to age so I really needed to do my thing on the bike to create a gap large enough for him not to be able to catch me on the final run. The next thing that went through my head was this sprint distance bike was as short as they get. In this situation I would have benefited if it was 12, 12.5 or 15 miles to create a larger gap. This was all a hypothesis but I will tell you, it kept me dialed in for the entire bike leg. I pressed the entire 10 miles without a mental or physical let down.

When we got to the u-turn four miles up on the A-1A road I was curious to see if there was a gap and by how much. At that point when I spotted him I estimated I created a one minute gap. Now I was thinking I could get that to two minutes on the four mile effort back before tackling the bridge (twice) and gain maybe another 30 seconds or so as I’ve been training on the bridges and hills a lot so I thought it would come to my advantage. When I saw Olie next on the bridge I was coming back and he was about at the peak going out. I estimated I had about a 2:00-2:30 minute lead. I aggressively attacked the final stretch, had a smooth dismount and final transition.

Now the final 5k run was on. When runners left transition we headed right back to the Blue Heron Bridge and at .40 miles we approached the base of the bridge before climbing. I remember thinking, “why do I do this?” I was suffering pretty bad at that point and the thought of Olie now charging on the final run kept my head and legs spinning. The negative thought vanished and I switched to attacking the bridge climb. It was laboring but all of the bridge climbs and hill repeats I have been doing in my current training block were paying off. I was moving quite well. As I got to the top of the bridge I let gravity and my body take me down at a pretty quick pace.

Then it was the u-turn to immediately go up-and-over again. As I began my final climb I was hoping I didn’t see Olie for a bit. When I reached the peak of the bridge he was there. I estimated I still had a 1:30-2:00 lead and he still had one climb left. As I descended on the bridge and then on the flat roads winding through the beautiful neighborhoods hugging the coast I just kept pressing. My pace wasn’t slipping and with the bridge effort I just completed I was really pleased with how I handled it. I kept the charge on, finished with the win and then greeted Olie. We spoke a bit after the race along with his mom. What an impressive young man. He had great perspective and has a bright future in the sport. He noted the bridges really impacted his finish. It really was a quadruple whammy as we finished the bike leg with two climbs immediately followed by two run climbs with our heart rates really elevated and legs toasted…

Reflecting on the race I was pleased. My progression in this training block to Nationals has shown improvements in my bike power and I’ve maintained the run speed I attained at the beginning of the year during run season. My bike on this day was on and my number one focus, the second run, I was pleased with. I was five seconds slower than the 5k run pace I was targeting but with the bridges in play I was content and knew that impacted the time. I was satisfied with the execution of my race plan while also flexing to race and strategize a bit.

Here are a few take-aways I offer from this race:

Now it’s less than three week to Nationals. I have some things to clean up and still lots of work and recovery in store. I love this journey and I can’t wait to spend a few days with friends and teammates in Tuscaloosa, Alabama.