Do you follow a specific training plan? One of the things I love about training is writing training plans. There are so many factors to consider it’s like putting a puzzle together. I have all the pieces in front of me and it’s a matter of finding how they all fit together to form a nice finished product. Today I’ll share some of the things I’ve learned through a couple recent examples for run, triathlon, and duathlon training plans.

Like with any plans whether at work, home or play I’ve learned to start big picture. For these plans it was identifying what the main races for the year would be, the “A” races, and then identifying additional races to fill in the calendar, the “B” races. The “A” races  consist of only a few for the year and provide the anchors for the training plan. The “B” races are used for various reasons. Usually it’s for the joy of racing, building and practicing for the “A” races.

For me, one of my “A” races for 2019 is the USAT Duathlon National Championships on April 14. I started putting my plan together last November. Having not competed in a duathlon before but many triathlons I knew it would be similar but would need to get used to running before the bike versus the swim.  I knew I would need several races to practice and build upon leading up to Nationals. I identified three duathlon races, my “B” races, I would compete in between December and March. These were strategically placed far enough apart to build my racing fitness and tweak training plans based on what I learned from each race.

One of the complexities that comes into my plans is fitting in run races. I compete in run races for the joy of competing but the main reason is they serve my overall purpose of running as fast as I can in a triathlon and now duathlons. My run race distances match the distances I compete for triathlon and duathlon races. For the last several years the focus has been on the 5k distance to support my triathlon sprint distance racing with a couple 1/2 marathons tied to the distance of a 70.3 Ironman race.

My current plan brought a new wrinkle with the Duathlon National Championships. I will be competing in the Olympic distance with the first run being 5.25 miles and the second at 2.80. I’m used to running 3.1 miles at the end of triathlons so that isn’t something I have to get used to. The 5.25 mile distance in a race is something new for me. The closest run race distance you can find to that is the 10k (6.2 miles) and at a few races you may find a 5 mile race but they are much more uncommon.

With this consideration I needed to incorporate running a 5.25 mile distance as fast as I could into my training plans. I haven’t competed in a run race at either the 10k or 5 mile distance. I found a 10k race I would use as a “B” race for this purpose in February, The Best Damn Race. I’m looking for another race in March that fits with my overall plan as well. I’ll tweak the approach for the March race based on learning from The Best Damn Race.

While I’m putting in a lot of specific work in the plan on this component, I’m also considering the other training aspects – the bike, strength, flexibility, and the swim. Even though my first triathlon race isn’t until May 20, I am working the swim into the weekly plans.

I’ve mentioned some of the complexities already. That is just from a sport perspective. I think we all know there are so many other factors that can impact these plans. Life events, stress, work schedules, travel, vacation, illness, and family are elements we need to consider when thoughtfully putting a plan together and then knowing there will need to be adjustments along the way for various reasons.

While I write my own plans I also started coaching Dan Radde (blog photo above) in December, just two months ago. Dan and I spent a good amount of time discussing the big picture. Dan completed an exercise I asked him to do that would help us build a plan. This covered many things from goals, history, races, and how we would interact with each other. As much as I can help build a plan, it is critical we communicate often so I know how training is being absorbed. We agreed on how we would communicate with each other covering both style and regularity.

One of the complexities with Dan’s overall plan is he has two “A” races within a relative short-time frame in different events. Dan will be running the Gasparilla 1/2 Marathon February 24 and then competing in the Olympic distance at the St. Anthony’s Triathlon  April 28.

With such a short window of time from when we started in December to the Gasparilla race in February, we identified one “B” run race. This would be served to access Dan’s run fitness and pacing. The race would be The Best Damn Race 5k on February 2.

We chose this race as it fit exactly into our cycle of training week progression leading up to Gasparilla….more puzzle pieces. Speed work is a part of any run distance training plan so running the 5k would provide us with another great speed workout while also dialing in on Dan’s pacing and other metrics. In addition, it would provide game day experience for Dan with the emotional elements.

During our speed workouts leading up to the race I was keen on having Dan do a few workouts/simulations so we would determine his race pace goal. Make no mistake about this, while we were preparing for the Best Damn Race 5k, I was balancing that with the progression up to Gasparilla and St. Anthony’s coming quickly.

For the Best Damn Race Dan had to travel the week leading up to the race for work. I have actually found this doesn’t work out too bad. Race weeks are used to prepare the body for the race with less volume, good intensity and enough rest. One of his three travel days was used as an off-day anyway so that only left two specific run workouts he did on the hotel treadmill as the temperatures outside were not too favorable for a run.

Prior to Dan traveling for work we did one last speed session to determine his specific race pace goal and thus his overall time. Based on the workout we agreed on a 7:00 pace translating to an overall time of 21:45. We discussed preparation for the race including nutrition, sleep, the morning of the race, and also the plan in the race itself. That plan is sealed in a safe somewhere… We can’t divulge all the information here…competitive advantage right?

The target was a 7:00 pace = 21:45. Dan ran a 7:00 pace = 21:45!!! When he came across the finish line he was showing a good amount of discomfort. We had a really big hug and shared our appreciation for his effort. I asked him, “how do you feel?” He responded while still trying to capture his breath, “I gave what I could. I had nothing left to give.” I said, “that’s exactly how you should feel!” He left nothing out on the race course. He ran hard, executed the plan, and had nothing left to give crossing the finish line. Love it!!!

Dan walked to the Results tent where they printed his results including time, pace and placement. Dan came by with his sheet and asked if it was showing what he thought it meant. Dan WON his age group!!! Dan hadn’t run a 5k in 8 years. He set a new personal record of 21:45, beating his previous best time of 23:28. After I confirmed what the sheet displayed, we had another big hug! What an accomplishment.

The time was no surprise. Dan executed the plan that was in place. He raced his race with what we thought he was capable of on that day. Not all race days go as planned and I’d say most don’t. We did plan for variables so he was as prepared as he could be. But it is one thing being prepared and another doing it. On this day Dan ran his butt off and the results showed.

We celebrated after the race, taking pictures of Dan on the podium and ringing the Personal Record bell. Before Dan left the race, I shared one final thought – the Midnight Rule. He could go celebrate his tail off all day as he should! At midnight, we are back focused on Gasparilla only three weeks away. Knowing he had a 12 mile run on the plan for Sunday was a humble reminder…part of the master plan.

Dan and I will spend some time early in the week reflecting on the race in an attempt to learn and get better. These inputs will help me adjust the plan if needed as well as validate some of the metrics that will adjust specific workouts. He’s getting faster…watch out Gasparilla and St. Anthony’s racers.

Even though I write my own training plans I am constantly gathering inputs from others. This is from a macro plan perspective, specific workouts, pacing strategies, and the list goes on. Leading up to my first 10k at the Best Damn Race, I asked one of the top 10k racers in the area, Anthony Douaihy, about pacing strategies. I also spent several hours researching and learning different strategies. Thank you Celia Dubey and Michael MacDonald for consulting with me here too!

I know how to race 5ks as I’ve probably run over 50 in last 4+ years including those embedded in triathlons and now duathlons. I put in a lot of volume running on a weekly basis so fitness for the 10k distance wasn’t the question. It was how could I race the distance most effectively. I learned a lot leading up to the race and will tweak based on how it played out. Thank you Anthony for those helpful 10k racing considerations. They were extremely helpful. 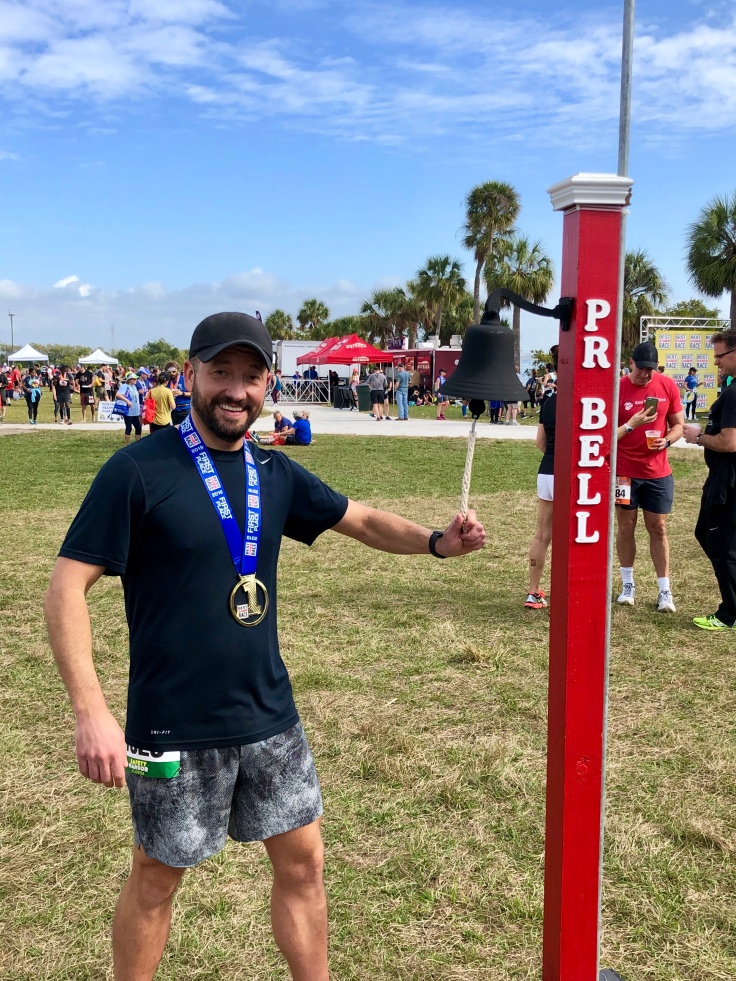