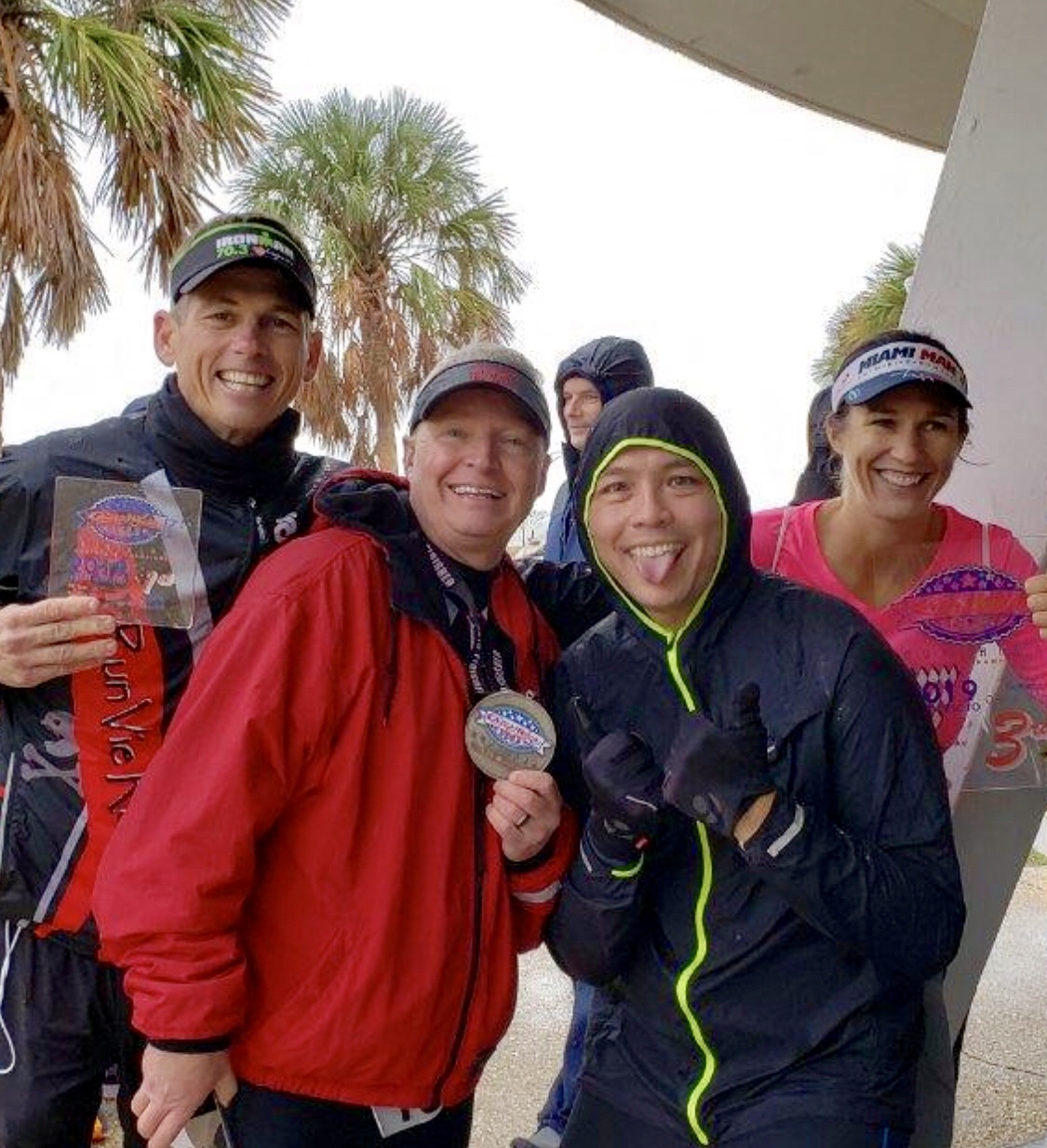 I learned a lot about how to race in cold and rain this week. Yesterday’s duathlon in Fort DeSoto, FL, Chilly Willy, was a perfect opportunity to learn something new in some not so favorable conditions. Today I’ll share what I learned preparing for the race and then how it played out.

Early in the week the forecast was calling for a front to pass through on Sunday bringing rain and cold air into the area. In my four years competing in triathlons I raced in rain a handful of times but not cold or cold and rain. I can’t remember if I had a run race in rain and cold but certainly cold. This was a new challenge balancing staying as warm as possible but also placing a priority to be as aerodynamic on the bike to not create additional friction with the wind thus slowing a rider down.

Wednesday I had a great discussion with coach, Celia Dubey, on considerations for the conditions. Celia provided guidelines she uses for all weather conditions. We continued to go back and forth with additional questions I had. The keys would be to dress as aero as possible, wear clothing easily removable if needed (layering), and consider applying a balm to the skin.

As the race drew closer the forecast got more specific with timing of the front. We now knew we would be racing in rain and cold. On the plus side, everyone I talked to who competed at Duathlon Nationals last year in Greenville, NC commented how miserable the conditions were due to the cold. This race would provide a great opportunity to learn racing in cold temperatures as I am racing in Greenville, NC this year at the Duathlon Nationals and it will probably be cold. Celia also noted how this race over the years had provided her with her greatest learning for other events across the world as it had been much colder in places where she competed for world championships.

On Saturday I went through my race plan and checklist. I added in a few things for these conditions and also adding quantity of items as well. A few extra socks, shirts, towels and pair of shoes were added to the mix. I picked up a balm from Celia to try and got to bed at a good hour.

Sunday morning came around quickly. I got up and looked at the weather. It was already raining steady with no end in sight via radar and forecast. I applied the balm, got ready, loaded the gear and headed to Fort DeSoto.

I checked my bike into the transition area and talked to a few of the race leaders. They were monitoring the conditions with all possibilities in play including canceling, modifying the course or keeping as is. Pretty quickly it was determined to push the start time back 30 minutes to 8:30am. It was then determined to shorten the run course from 3.1 to 2 miles due to some of the course being under water and the bike course from 10 miles to 6-7 miles, again due to unsafe conditions.

The good thing however was we were going to race! A few things that worked really well pre-race included:

The first 2 mile run felt great. The temperature was around 50 degrees with a slight rain. We had wind at our backs for the first mile so the pace was just quicker than my plan but expected with the wind. The second mile coming back was a different story. The wind was smacking us in the face. The pace fell off just a bit as expected but my overall pace goal was achieved for that leg of the race.

Now the interesting part cycling in rain, cold and significant wind. I had a bit of a challenge buckling my helmet on using gloves but after a couple attempts I got it and was off. The bike portion was all over the place and I mean that in several contexts. The first mile plus was with wind at our backs so that felt good easing into the ride after burning the legs and having an elevated heart rate from the quick two mile run sprint.

Then came the left turn heading east and there was the wind. It was blowing me and others sideways while also providing an invisible wall to ride into. My thoughts here were to ride as aerodynamic as I could to create less wind resistance. Once we got to u-turn the wind was then aiding until the last mile plus segment. Again I was just thinking be as aerodynamic as possible and get to transition. During the ride I was surprisingly not feeling cold other than my fingers losing some feeling. The gear, balm, and effort were keeping me as warm as possible.

Having a good dismount off the bike I ran into transition to drop the bike and begin the final two mile run. As I was running into transition I ran through several puddles of water soaking the feet. This was a sprint race so there was no thought of taking time to change socks in transition. Just deal with it and there was no issue at all. The issue in transition was the fingers. With the combination of wearing gloves and losing feeling in my fingers I could not unsnap my helmet. After a couple attempts I simply ripped my helmet off my head. I think the grazing of the strap across my face was a good wake up call…ha!

I had a really quick transition putting my run shoes on and off I went. At this point there were a few of us that came in off the bike together with some of them looking like they could be in my age group. The beginning of the run was just like the many triathlons I had raced. The heart rate spiked coming off the bike with the quad muscles feeling really full and heavy. So it was a familiar uncomfortable feeling but just what it should have felt like. My pace was good and I was chugging along. At the one mile (half-way) turn around point, I could see I had two racers within a short distance so this was going to be a tight finish.

With about 200 meters left I could hear wet footsteps of someone directly behind me. I wasn’t sure who it was so assuming it was a racer in my age group and also not wanting to give up an overall spot, I picked up the pace and got into a sprint to the finish. This is how we end several of our track workouts so that was great to draw from here. In some races there isn’t a sprint left in the legs. Yesterday I was fortunate to have the legs to go into the final sprint. It was gratifyingly painful and crossed ahead by a few seconds. On another day I could flip the story and say this guy had another gear and I didn’t. Immediately after we quickly exchanged our thoughts sharing how we pushed each other to the finish line. Over and over at these races everyone supports each other and appreciates the efforts no matter the placement.

The coldest part of the entire day was post race. The rain and cold continued but now not keeping the body warm with effort made quite a difference. I was fortunate to win my age group and place 9th overall to a great field of racers. The other fortunate outcomes were spending the morning with my racing teammates and learning a great deal about racing in those conditions. The blog picture is with fellow racers Don Whallen, Dave Harris and Karoline Muehlfellner-Baier. Great races – Karoline finshed 3rd overall female, Don placed 5th in age group and Dave secured a 9th place finish in age group in a competitive field. Tyler Gainey, pictured below, also won his age group.

Dave maybe had the best idea of the weekend when he suggested a trip to Cider Press Cafe on the way back home. Take a look at my brunch, The Elvis, in the picture below. He then suggested we stop at the new vegan ice cream shop, Plant Love Ice Cream, that opened near Cider Press Cafe. He twisted my arm so I joined… Wow, both were fantastic.

Never stop learning. Complete a race plan and consult with a coach. This race and weekend presented a great opportunity to learn and try new things I can use in the future.

One thought on “Racing Chilly and Wet”