What happens when you think you are at the end of a 15+ mile rigorous trail run and realize you are over nine miles from the car, in a secluded area, and about a 90 minute drive from home? This is what Michael MacDonald, Anthony Douaihy, Elia Luti and I encountered Sunday morning at the Croom Loop Trails of the Withlacoochee State Forest.

This story all started Friday evening when at the end of a run we determined our Sunday long run would be at the the Croom Loop Trails. This would serve as a recon run for Michael and Elia as they are racing the Croom Zoom 100k Race in January. We received intel about the trail from our running mate, Alir, at the end of our Friday run. Before we left we confirmed our plans to meet Sunday morning at 5am and make the drive up together to the trails. Unfortunately we didn’t do anymore research about the trail.

As we were approaching where we thought was the start of the trail we took an incorrect turn down a dirt road as we saw a few other vehicles make the turn. These were hunters who were taking part in day one of General Gun hunting season. As you can see in the first picture at the end of the blog, I was checking out what was down the road…it wasn’t safe for a car as it was an off road sandy path made for a 4×4 type of truck. I asked one of the hunters where our lot was and he sent us down the road another mile.

Sunrise came and we were ready to start our run (next photo of a little light showing the trail). We briefly looked at the map of the trail, understanding we needed to stay on the orange marked trail, and Michael grabbed a map of the park and trail. As we started the run, we experienced what would be ahead of us for the next 15 plus miles – uneven ground, roots, lots of brush and limbs, spider webs, ascents and descents – a trail run.

The additional variable to add were the hunters staked in trees with gun fire going off in the background from time to time. There was a warning to wear bright colored clothes for those on the trail during hunting season. I’m thankful I didn’t wear black on black which is a common combination for me.

We quickly settled into a fast pace for a trail run or at least it was fast for me. I quickly reminded myself I’m running with three of the fastest gentlemen in the Tampa Bay area. Roughly three miles in I was pondering how I was going to keep the current pace for the entire loop. I was straining and they seemed to be running quite comfortably. I wanted to hang as long as I could and not disappoint the boys, and know that by running with them would make me so much stronger and faster. They were extremely supportive as I shared a few miles later I was struggling to keep the pace, but keeping the pace.

Michael then pushed me to lead the group saying, “this will keep you focused.” It’s unreal but immediately I picked up the pace. It was like I got a shot of adrenaline. I led for roughly a mile and then for the remainder of the run even though I was straining, felt like I was in a comfortable discomfort. I remembered one of my favorite lines by Pro Triathlon Coach, Chris Hauth, who I have shared on these blogs before – “Get the body tired and then the training begins.” I was in the game and drove myself hard until mile 15 and then the discomfort turned to a combination of discomfort and pain but knowing the end was near I continued to press. The boys still looked fresh – they are beasts!!!

We were 16 plus miles in as we took a few detours to questionable decision points we had to make as the signage was difficult to see in some locations. As we came to find out we made one major error that we didn’t know about until now…16+ miles in. After studying signage and the map while still on the trail, we continued on to what we were hoping was the end of the loop (check out the photo below of us in the woods pondering our next step…not as happy as the featured blog photo above). When we came out of the trail we were in a parking lot next to the Withalochee Trail that was not our starting point. It did have a map…

After studying the map and then using my phone to locate our car we realized we were over nine miles away. NINE MILES away!!! What a moment of reckoning it was for us. We consulted with two bikers on recommendations to get back to our car. The look on their faces was priceless knowing we were nine miles away, hurting and without nutrition. Well, I was hurting… Thankfully there was a water fountain so we all took in some fluids.

While we were discussing our options I even checked Uber and it of course indicated there were no cars available in the area…ha! The bikers did share their concern with one of the two options ahead of us. One option was to cut through the woods. They noted the safety hazard of passing through the hunters. We also considered the possibility of taking another wrong turn. The second option was to take a slightly longer route for four plus miles up the bike path followed by another four plus mile route on the road back to the lot. We chose the safer and longer option.

We began running again with Michael and Anthony leading the way and Elia staying back with me as I was really hurting at this point. My hip flexors were as tight as they could be and then I bonked, losing my head with the lack of nutrition. Having been there before I knew I had to stop running. I yelled ahead to Michael and Anthony to hold up and wait for Elia to catch up to them (next picture below). We agreed for Elia and Michael to run ahead to the car while Anthony and I would walk to the intersection four miles ahead and wait for them to return with the car. I was so thankful they were training for the ultra run race (100k). I love running a high volume of miles each week including a really long run on the weekend but all three of these guys are in another league with the distance racing and running volume they do.

I am grateful for Anthony walking with me. In a way it was an extension of the bonding that resulted on this day. We caught up on what was going on in our lives. Anthony and I reached the intersection and in about 10 minutes Elia and Michael arrived for pickup and departure back home. Elia and Michael ended up running 26+ miles while Anthony and I ran 18.5 along with walking another four plus miles. When leaving in the car I was already at 37,000 steps for the day.

We all agreed as tough as this day played out, it was a day we would never forget and ultimately be a great story to tell. “Remember the Croom run…” will likely be a conversation starter for years to come. As we pondered what went wrong we still didn’t have enough fresh brain power to identify the route casue. We agreed to take it as homework.

Anthony shared the GPS Map of our run path and I found one to compare that to later in the day. As you can see in the side-by-side comparison (final picture below), we took one MAJOR wrong turn going right vs. left. Our route was not a loop…ha! Elia also captured the path we took via relive.cc including their final run back to the car…amazing view.

When I came home I went into full recovery mode, treating my legs and taking a nap. I felt like I had completed a six hour Ironman training workout. The trails presented a new physical challenge and made me realize I have a lot of work ahead of me. These types of workouts in the trails for running and going to the hills for rides will be a major element in my training plan through 2019.

We learned a few good lessons regarding preparation. As difficult as this day was, I am feel extremely grateful to be healthy and have bonded even more with the boys. Michael and Elia summed it up well, “It’s all about the journey, not the destination.” 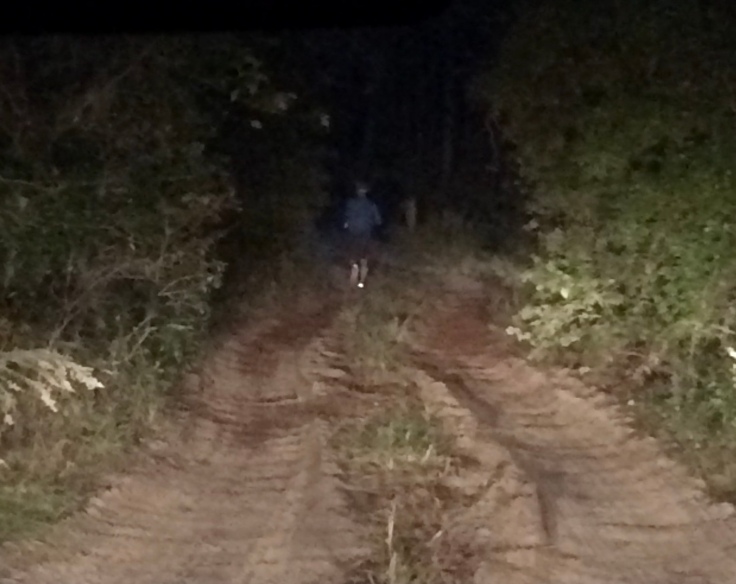