I’m going to continue to share my adventures with learning to swim effectively as it addresses so many aspects from the physical elements to the power of the mind. I will  post periodic updates when there is something significant to share through August where my goal is to swim at a level to be competitive at the USA Triathlon Sprint National Championships.

In last week’s blog, I Can’t Swim/I Will Swim, I shared my numerous challenges swimming. Since then, I completed my 2nd full week of Masters Program swimming and competed in the Cocoa Beach Triathlon yesterday. So, can I swim yet??? Not so much…

I started the week, 2nd week of the Masters Program, on Monday and maybe had the worst swim in over a year. I felt anxiety through the entire one hour rigorous routine. On Mondays the pool length is 50 meters, double the distance for the other workouts and what I’m used to, and it really got in my head. Along with the anxiety came a stiff body from not relaxing and that resulted in poor form and never having the feeling that I could get enough breath. I left the pool Monday acknowledging how bad it was but knowing in the back of my head that coach said it was going to be quite rough to start retooling my technique and building endurance. Boy that felt like an understatement but I still believe 100% in the overall plan with coach. Wednesday and Friday practices went better, but still no “a ha” moment where things are coming together. Not that I expected it yet…I know this will be a long haul.

Sunday’s race was in Cocoa Beach, my first, but will not be my last. It was a great venue swimming in the Banana River followed by a ride down and back on the A1A and finishing with a run on the Cocoa Beach Golf Course and surrounding neighborhoods. I was in the 3rd wave starting already submerged in the Banana River. I was as ready as I could be for the swim and wondering if at minimum I could be a bit better than prior races.

I started the swim pretty well with my breathing and swimming but at some point around 75 meters in anxiety crept in my head. I had not experienced that sensation in probably the last season and a half. At some point between 50 and 75 meters I think I increased my speed too much and my oxygen use got a little out of control triggering the effect. I struggled through the remainder of the swim with the anxiety and the side effect of draining energy from what it felt like, my entire body.

I exited the swim 19th in the age group and it felt it but then I knew the fun would begin. I had a really good bike and run to finish 3rd in the age group. This field was very competitive so I left a bit conflicted feeling really good about the bike and run effort, both mentally and physically and unsatisfied with the swim and overall result. 2nd place was within reach with a good swim but even with my best swim the winner was too good.

I drove back after the race Sunday afternoon and could not wait to pack my swim bag for Monday morning. Monday morning came around quick. I struggled through warm ups, again with my breathing. Coach was near my lane so I quickly asked in a frustrated tone, “why am I struggling to breathe in warm ups?!?” He responded with something I really needed to hear on this day, “Alan, I’m swimming later today and I struggle breathing in warmups.” He elaborated by saying it’s getting the body and cardio charged and loosened up. Unlike the bike and run where I know how the body should feel when I’m struggling, I don’t yet know what is struggling when it’s a good struggle due to pure effort. I question whether I can even make it another five strokes without something really bad going to occur.

I struggled through the remainder of the workout but it wasn’t a train wreck like last Monday and had some decent learning moments so chalk one up for a sliver of prgoress. I’ve reflected a lot about this and the bottom line is I have to build my endurance engine while learning how to swim correctly and it’s going to take some time. Building my engine should begin to pay dividends even if I’m still struggling with being consistent. Having the confidence to drive hard through a race without worrying where my next breath is going to come from will come…..it will come…

Lastly, I was excited to wear my new triathlon kit, featuring The Healthy Giraffe pictured here on the blog. Below is a picture of the back. At minimum maybe the back will distract the competition… THANK YOU Glenn Hamilton for your incredible design work!!! 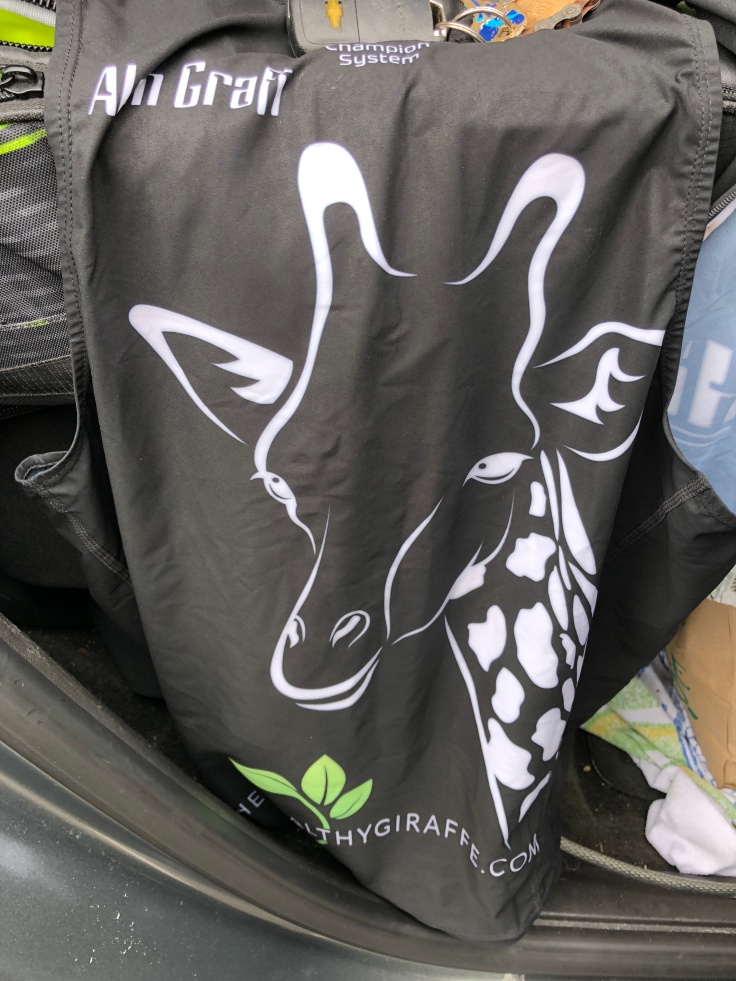