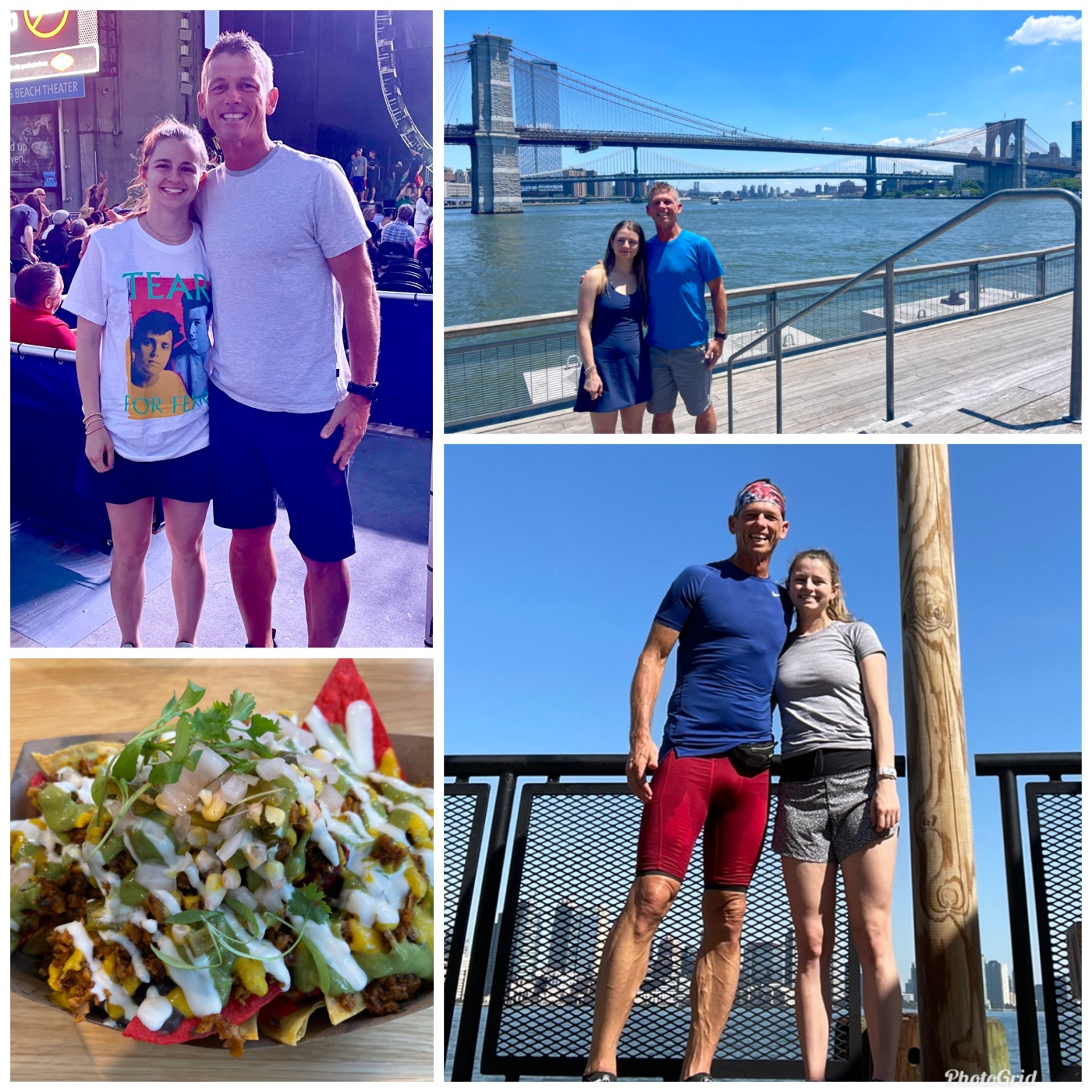 I love the opportunity of traveling healthy to another city and this weekend was to the Big Apple, New York City, where I packed in a tremendous amount of health for my mind, body, and soul. Here I share a life memory experience visiting my daughter, Morgan.

Whenever I have traveled with or to see Morgan, she finds amazing plant-based restaurants and options for us so I know I didn’t need to pack much and/or look for places to eat. I brought with me:

I left later Friday afternoon and after a lightning delay in Tampa I arrived in New York City where Morgan and I ate dinner at an all-Vegan Italian restaurant called, Double Zero. The owner has three vegan restaurants all adjacent to each other on a street corner. I had a pasta bolognese dish and a couple slices of Morgan’s Margherita pizza. It hit the spot and in typical Morgan fashion, she nailed it. She shared how her summer internship was going and life in the big city. She seemed so happy.

Saturday morning we were going to meet at 9:00 and run three miles together along the Hudson River. I had more miles to get in so I ran the east side of Manhatten and I found quite the contrast to the west side. Running with Morgan while she was sharing what we were passing was amazing. It was her city already…

After the run we were pretty stinky so it was time to shower and meet for lunch at a place called Beatnic, a restaurant that was Chef Chloe Coscarelli‘s but now under new ownership with the same menu. We had vegan chickn’ sandwiches and shared a tasty mac & cheeze with a few dried mushrooms to the top. We went for a long walk after where she was showing me the differences in neighborhoods before we arrived at Whipped Urban Dessert Lab where we both enjoyed oat milk based ice cream cones.

We looped around and needed to reset back at the hotel and her apartment prior to dinner. We took the subway up town where she showed me where she is working and we ate at Jajaja, an all-Vegan Mexican restaurant where we both said it was the best nachos we’ve ever had along with a tasty burrito. We were full and content for our upcoming train and bus ride to Long Island. With all we ate it was great I completed over 43,000 steps for the day.

In Long Island we arrived at Jones Beach State Park where Tears For Fears was playing at a most beautiful amphitheater setting on the water. I was in New York, with Morgan all day, and now seeing one of my favorite bands a week after Father’s Day. I could have stayed there all night as my heart was full of joy.

After the concert we had a surprise exercise routine in play as we just made a bus to take us to the Train Station. We were warned we would miss it and to start running so we ran to the bus and then waited about 10 minutes before leaving… They filled every bit of standing room on the bus they could.

It was a great setup for concerts at the venue as they take you directly to the station without stops to get people back to the city. What we quickly discovered was the bus was arriving at the same minute the train was supposed to leave with the next one slated to leave 75 minutes later. The entire bus was on edge knowing we all had to jump off the bus, run up the stairs to the platform, and hope to get in the doors. That we did with maybe 15 seconds buffer before it took off headed back…wow!

After the train ride and Uber to Morgan’s apartment we said our good-byes and I was dropped off at my hotel. My heart was full, legs were tired, and my mind was reflecting on the time together.

Fours hours of sleep and I was up to go to the airport. Food options on this morning were the worst of the weekend. I had a bagel and kombucha in the airport and almonds on the plane but it worked. It really didn’t matter as I was still full of appreciation for the time with my girl and the exploration we had.

This trip was full of health for the body, mind, and soul. Can’t beat that…