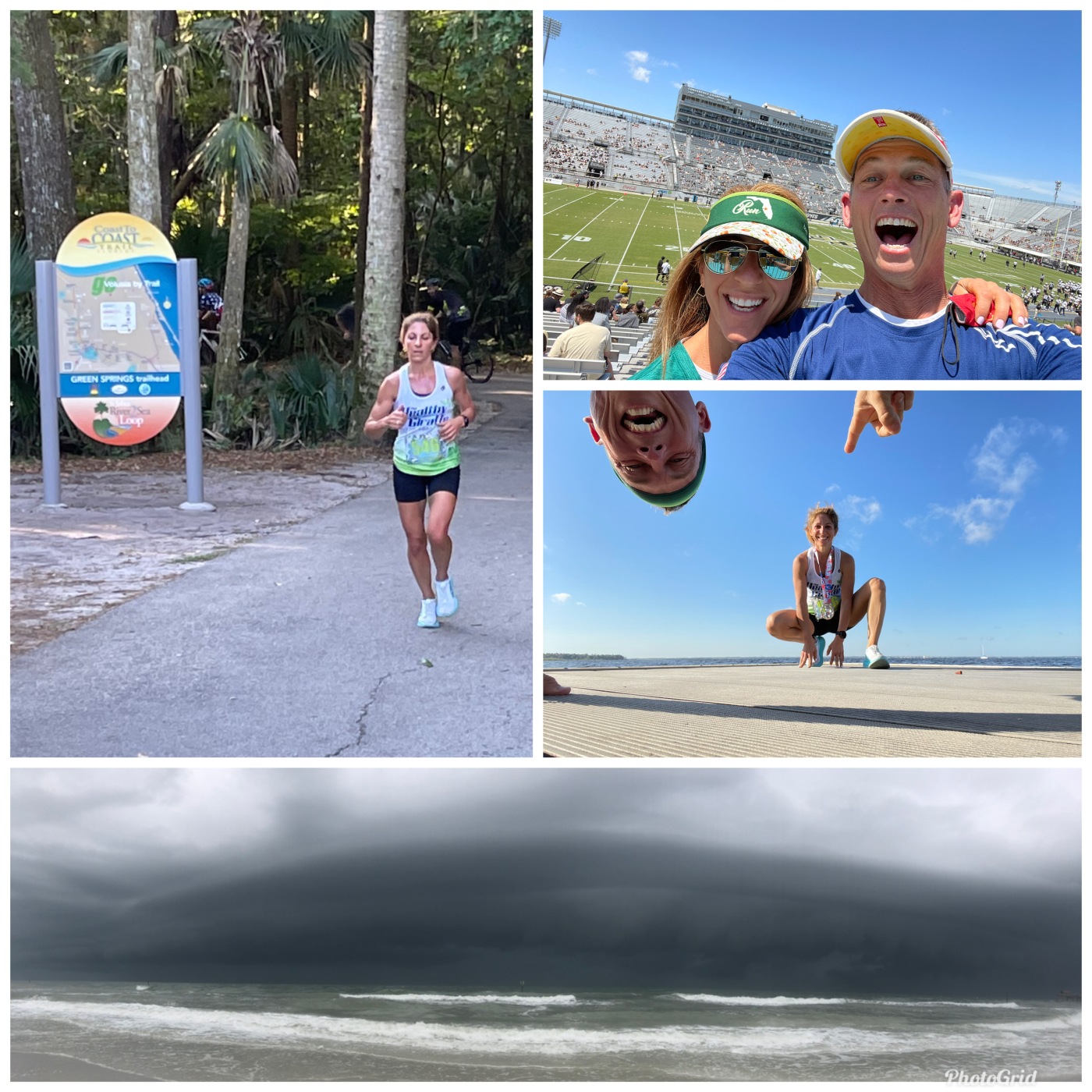 This weekend was the tale of two completely different days of Florida weather resulting in one of two races being completed. Here I will share what Lauren Nolan and I experienced traveling around the state of Florida attempting to complete two races and having a blast regardless.

First up was Lauren who was racing Saturday morning at the Green Springs Park 5k in Deltona, FL. We left Friday evening after dinner on a two and a half hour drive and arrived at our hotel around 9:30 PM. Saturday morning came around quickly and we made the short drive to the park adjacent to Lake Monroe, a beautiful lake that went on for miles. The temperature was in the mid-60s, it was sunny and humid. We completed Lauren’s warm-up and out she ran through the park and onto the East Central Regional Rail Trail for an out-and-back two-lap course.

When she came through at the half way point you could see in her face she was hurting but her run stride looked the same, compact with a high turnover, and she headed back out. When she came through the finish she had the same look of discomfort but also the look of relief it was over. Although she wasn’t happy with her time she won the overall race. What you come to realize racing is you don’t always have your ‘A’ game and when you don’t you have to figure out a way through it and that is what she did on this day. She gritted it out on a day she wasn’t feeling it along with other factors that impacted time. On this day it was certainly warm with a very high humidity.

We took a stroll down to a boat ramp overlooking Lake Monroe and reflected on her race. It was a beautiful thing…

We then went back to the hotel, showered, packed up our things and headed out. We found a great restaurant in Lake Mary, Roots Raw Juice Bar, where we both had an Acai Bowl that was quite filling, very tasty, and full of antioxidants…great for recovery. Timing was perfect as the University of Central Florida was hosting their spring football game. We took the short drive to campus, watched a bit, and then headed to Ponte Vedra where I was racing Sunday at the Game On! Ponte Vedra Beach Triathlon.

We picked up my packet, checked into the hotel and headed out for dinner. During dinner, rain began to fall and continued later into the evening. What I was curious about was the anticipated rain on Sunday morning. It looked like we were certainly going to race in rain and my fear was if lightning accompanied it, they would cancel the race. I completed all of my race preparations early and after coming off of a taper week, I felt fresh for the first time since the first week of February.

When we arrived at the race location Sunday morning it wasn’t raining but the radar was showing significant showers approaching shortly. After setting up my bike in transition and completing a short run to begin warm-up the rain began to fall quite heavily and then lightning joined the party. The race director announced a delay to all race starts, followed shortly with a cancellation of the swim portion for triathlon races, and then shortly thereafter a full race cancelation as the lightning persisted and thunderstorm warnings were looking to continue throughout the morning.

It was certainly deflating to hear the call to cancel the race but it was the right decision. We headed back to the hotel, showered, packed up our things and headed back home. The four hour drive home was met with rain and much of it was intense. Usually some of that drive would include reflecting on the race and identifying what I could improve on for the next but this resulted in a missed opportunity to do that. I have one tune-up race left before the USA Duathlon National Championships in late May. What I did spend some time on was how not racing would impact my upcoming week of training and how my body felt going into this race and make adjustments.

With the race being canceled it can certainly put a damper on things but I can hang my hat on these positives from the weekend: