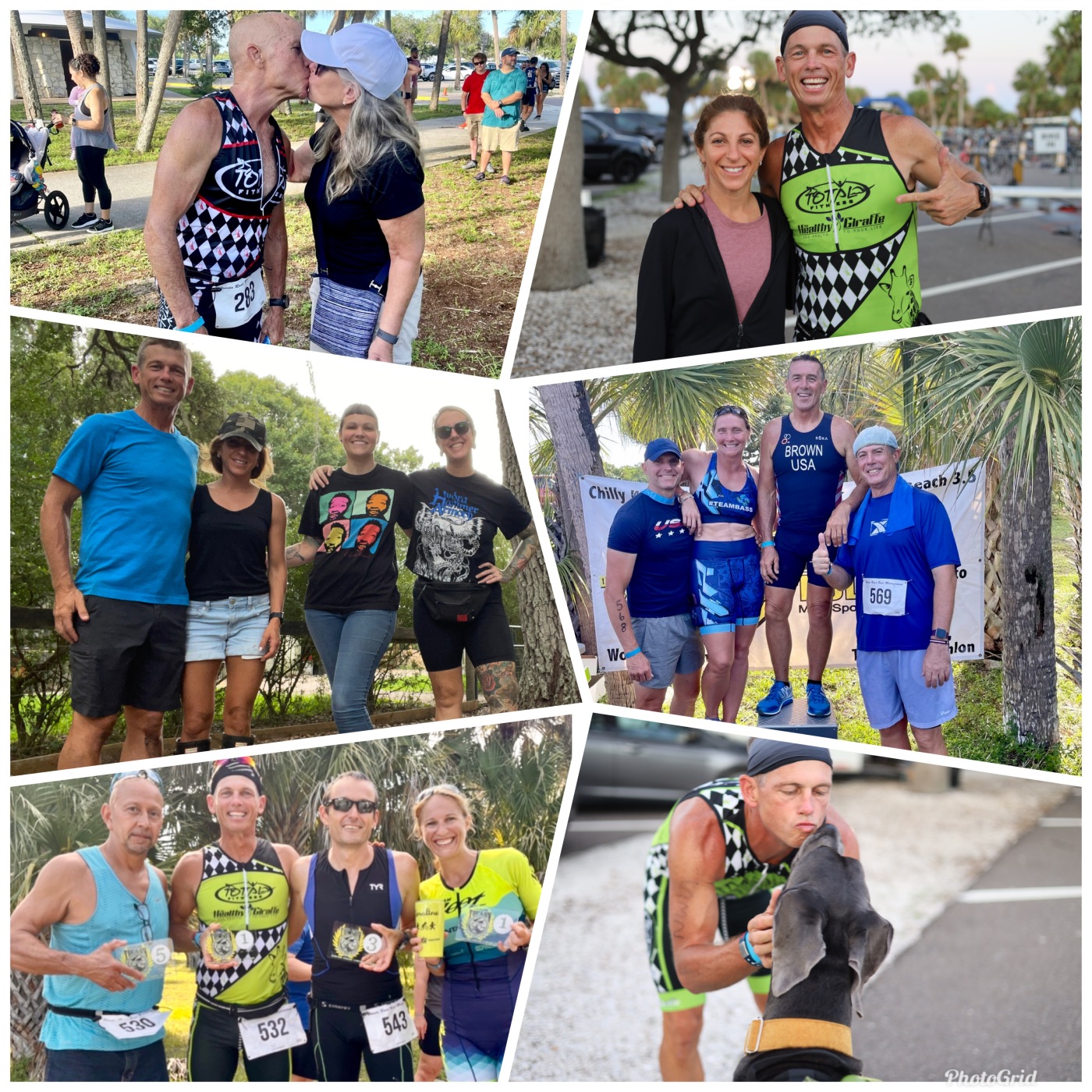 My first race back after a mid-season break was humbling as expected and quite spectacular. I participated at the 2021 Top Gun Triathlon via Fort DeSoto Beach Saturday morning with a host of friends, teammates, and competitors. Here I’ll share my race experience and four very special stories involving support.

After the USAT Duathlon National Championships (Sprint & Olympic distances) in late April I took a much needed mental and physical break from training and racing. I started intensity training back up in June in pursuit of the USAT Duathlon Long Course National Championship in late September. Training has been quite the challenge as I build base again and get the speed back I lost but it’s all a part of the process. Saturday was tune up race #1 with a Sprint distance duathlon on the books.

I was really excited about this one as I knew many of the competitors racing in the triathlon and duathlon. I arrived at the event early, pumped air in my tires, and placed my bike on the rack in transition. I love getting to races early and securing my spot on the end of the rack. Once complete I was able to meet teammates and friends. We took a few pictures, completed our warm ups, checked transition for the last time and left for our starting lines.

I had my game plan in place and was ready to test my fitness. When the horn went off I bolted out on the first run. After a half mile I was running a little faster than plan and also a bit gassed as I settled into my pace to take me the rest of the way for the 1.7 mile distance. At the u-turn half way through I had a young gentleman close behind and teammate Karoline Muehlfellner right behind him. When I came into transition I hit my targeted pace but I really worked for it demonstrating my current fitness.

As I hopped on the bike and took off it took me a bit to get in the groove. My hope was I could create a gap between myself and the young gentleman. For the entire 10 mile ride I was battling with a triathlete as we traded leads several times. We chatted after and agreed it really pushed us to efforts we wouldn’t have hit without the battle. As I came in off the bike I had a smooth transition and headed out on the final 5k run.

After a half mile I was at my target pace and working but felt under control. As mile one came and went I was just off my goal pace but felt ok. Mile two was a bit rougher as reality hit that my body didn’t have the fitness yet. As I made the u-turn at 1.55 miles I was hoping not to see the young gentleman within reach and I didn’t. The bike effort did create the gap I was hoping for and Karoline overtook him as well and was motoring! Mile three went better with my pace faster than mile two. As I went through the finish line I was thinking I had a long way to go to be ready for September. That was very humbling and motivating. I’ll get there…

Once the race was over and breathing was back to normal it was time for teammates and friends and this is what made the morning spectacular. There is such a special bonding-feeling participating and supporting at these races. Competitors are giving it everything they have for an hour or two where the body is at its limits and the mind playing all sorts of games. “Why do I do this?” is a common thought of mine when at a limit somewhere on a course and that turns into an extreme sense of accomplishment after. It’s a most beautiful mix of emotions…

Here are four very special stories from the morning in no specific order:

Jon Bass, who finished 2020 the number one ranked duathlete in the country (45-49 years old), had a most horrific accident two weeks before Nationals in April. He was completing a workout on his indoor trainer when there was a malfunction placing his back wheel on the ground while he was at full speed. When the wheel hit the ground it propelled him through his front window severing an artery in his bicep, cutting the bicep muscle to the bone, and as he described it, they had to staple many parts of his back together from the glass punctures.

He missed Nationals of course as he was in ICU for a couple days but over the coming weeks he got back on the bike and started again. He is running again as well but it’s lagging (in his head I think). So what does Jon and his wife Christie do…sign up to compete in the Top Gun Duathlon Relay. Christie completed both runs while Jon did his thing on the bike.

They are a true power couple as they support each other 100% in everything they do. It was so cool to witness them race together. They placed 2nd but more importantly they did it together! Spectacular!

Bob Brown, who had knee replacement surgery in late October, is on his path back to racing duathlons but the road back has been extremely difficult. He is in pain regularly including the non-surgery knee needing to be replaced. He is biking well however and we did a relay together in late April to get him back in the game.

As I was talking about upcoming races at a team practice several weeks ago, teammate Brett Brisky, alluded to the desire to race but he is running only currently. I quickly thought and offered an idea to him…”I know this guy who isn’t running right now but is a great cyclist and would probably love to do a relay….let me check with him.” Brett and Bob loved the idea and they signed up.

The day before the race Bob texted me how he was in so much pain doing one last tune-up ride that he didn’t know if he could race. He didn’t know what to do but by the end of the text exchange I had a good feeling he would show up. And that he did! This was Brett’s first relay and he has made so much progress this year running I was excited to see how they fared.

Well, these two did their thing, raced their asses off and won the Duathlon Relay. They both showed up, developed a new friendship, and had a great experience. They would not have been able to do this race without each other…Spectacular!

Another couple racing together, this time it was Karoline and Robert Muehlfellner racing individually in the Duathlon. Karoline is just coming off of a National Championship but Robert hasn’t raced in a duathlon in over four years. How cool is that? They supported the heck out of each other as well with Karoline winning Overall Female and Robert placing 3rd Overall Male placing him on the podium! What a cool thing to do as a couple! No wonder they are so happy! Spectacular!

Lauren Nolan, Joannie Rymsza, and Audrey Dingeman came out very early on a Saturday morning to support only. That is support and thank you so much!

I asked Audrey if she would like to come out as she had a tragic week personally and thought the environment would provide a lift for her. She also competes but not this weekend. Audrey lost her five year old Great Dane, Walter, who I just met three weeks earlier. He was the sweetest dog. Audrey came home the middle of last week and found him already passed. So sad…

Her other Great Dane, Mako, of course is struggling not having his pal around so Audrey is giving him extra loving care and brought him out. He was awesome! He was getting so much love from everyone passing. He is so gentle. I even got a few kisses…

Audrey noted when he got home he had his breakfast and passed out. He didn’t race but he had a full morning of excitement. Spectacular!

There were several more great stories Saturday and I could write a book. This community is so great. We support each other racing, coming back from injury, and when we have real life set backs. It’s just a spectacular thing…