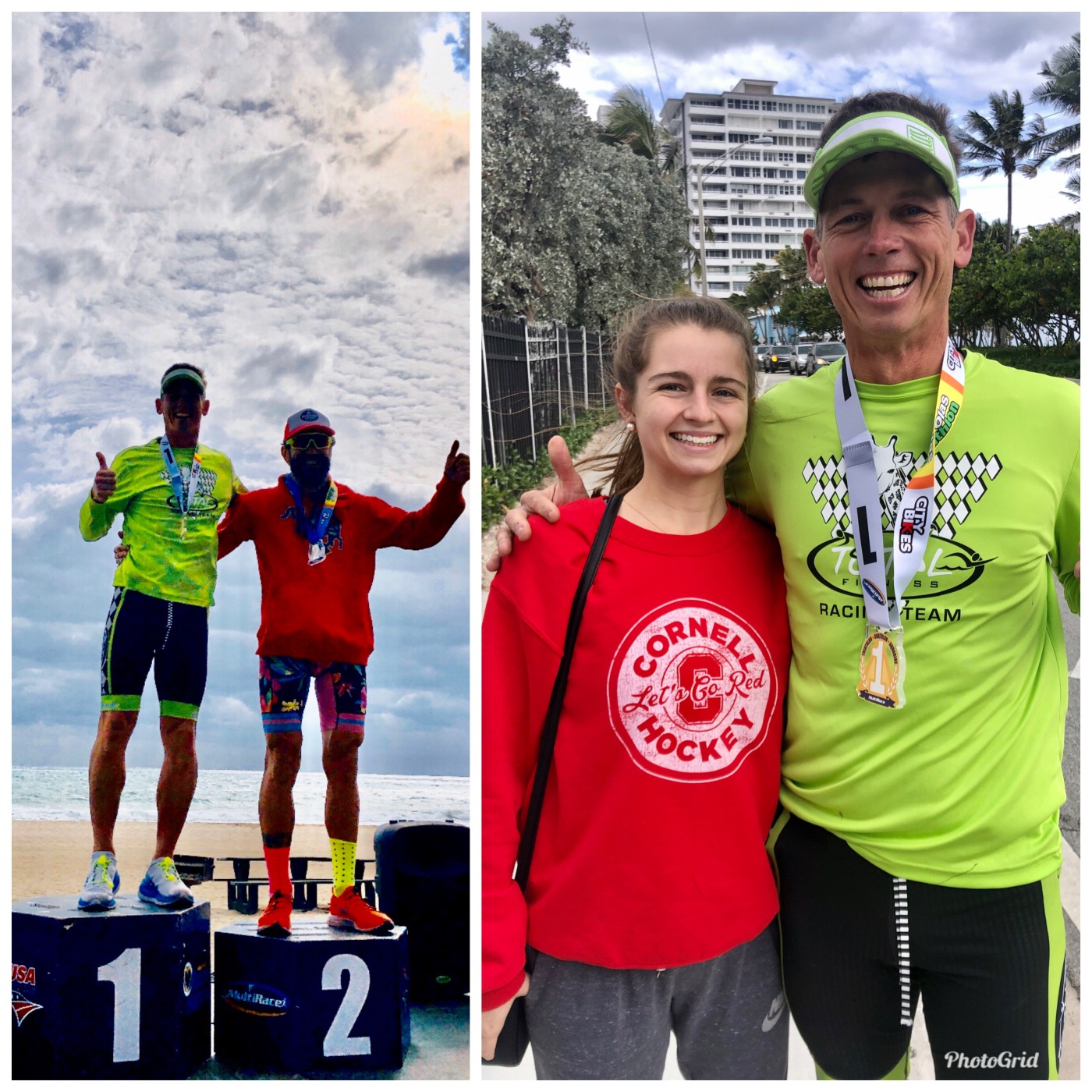 Practicing in terrible conditions can add confidence and an advantage when then facing them in a race. That’s what I experienced Sunday at the Las Olas Triathlon in Fort Lauderdale, FL where I competed in the International Distance Duathlon (1 mile run – 19 mile bike – 6.2 mile run). Here I’ll share my experience and things to consider when practicing and competing in poor conditions.

This may sound odd, but I identify poor conditions to practice in deliberately by the type of weather I may be facing in my most important races. This year I have two important races that could be cold, with wind, and also have significant elevation to climb. So even though and if you know me I’m not a fan of cold weather, I look for those practice sessions, especially on Sundays when I do longer workouts and/or simulations. I’m embracing the poor conditions knowing it will give me confidence and an advantage on race day.

Sunday was a great example of this playing out. Exactly three weeks earlier I spent the weekend in Boca Raton with my daughter, Morgan, and on the Sunday morning I had my long workout consisting of a run, bike and run. The bike effort would take me from Boca Raton through Fort Lauderdale and back hugging the Atlantic Ocean the entire way. Part of the bike ride through Fort Lauderdale was on the Las Olas race course so that provided a nice familiar feel on race day as well.

I have completed this ride several times since Morgan began attending Florida Atlantic University (FAU) two and a half years ago and on most rides the wind was a factor being so close to the ocean. Three weeks ago it was significantly windier than normal. There wasn’t supposed to be any rain that morning as well and one mile into the bike ride I was cycling in a steady rain with significant wind gusts sweeping through off the Atlantic. The rain only came back slightly on the remainder of the ride but the wind remained significant throughout. At several points a quick crosswind gust would sweep through testing my balance on the bike. My final run that morning consisted of on and off rain with the same wind.

Fast forward three weeks to Sunday morning. Winds coming off the Atlantic were even worse. The weather app on my phone noted 21 mph winds coming E/NE. Being right on the beach where the race was hosted it felt more like 25+ mph sustained with gusts around 40 mph and that was real. It felt like the onset of a tropical storm entering the area. While in transition setting up my bike area the race director announced the swim was still on but they were shortening the international distance triathlon swim to the sprint distance due to conditions and if competitors didn’t feel comfortable they could switch their race from the triathlon to one of the two duathlon races.

From race start and transition area the run and bike course would head north and return with the bike doing some westward routes as well over a couple bridges. So this meant in general we would experience crosswinds from the east with a slight tailwind coming back on the course. On my pre-race run I headed up and back on the race course. This validated the feel of the significant wind going out and having it with us coming back thus impacting paces (slower going out and faster coming back).

The first run played out just this way. With the first run being one mile this meant we went up a half mile into the wind before having the tailwind coming back. At the start of the race we are all fresh so the wind didn’t seem as much of an issue on perceived effort as it would later. I was happy with my first mile pace coming into transition and then the adventurous bike ride would begin.

In the first few pedal strokes I knew this was going to be a ride that would require razor sharp focus. In many races there are opportunities to lose concentration and I call it, falling asleep, where you lose the attention from the effort you are putting out. One benefit of racing with wind this significant is the need to be mentally on every second as the unpredictable gusts could swing you from side to side in an instant. I was very conscious on this day to have extra distance between me and other cyclists when passing.

When heading north I was leaning slightly sideways to the right as the wind was barreling in off the ocean. The International distance triathlon and duathlon racers had a second bike loop of the ourse where there was one location that created a crazy crosswind from the west for just a brief instance. So as we braced and leaned to the right an abrupt gust swept through from the west and then it went back to the east. Those were two brief moments of relief getting through those. Heading in the north direction was a beatdown and you could tell in the body language of several cyclists they were struggling. Practicing in those conditions several times on this route and just three weeks earlier in similar gusty conditions helped me take advantage.

After completing the second loop on the bike course we had a two mile ride south to transition. At this point my legs felt really good. I was pressing hard with no signs I was going to lose them for the ride but I was cautious of how much I would have left for the final 10k run. I don’t like to hold back on the bike segment and I take my chances on the final run. On this day I did that and let it lose going back with the tailwind. Even with the crosswind the slight tailwind felt like heaven at this point and gave all racers the ability to go in fast.

I had a good transition and headed out for the final run, a 3.1 mile run north before heading back along the Atlantic once again. I was beating my overall goal pace for the final run going out so I was feeling really good knowing I would have that tailwind coming back. But even if I was missing my goal pace going out just knowing the paces would be potentially slower was important to not get discouraged. To be ahead of them was just a bonus. I cut them down heading back and I was very pleased with the second run effort as well especially with it being my first final 10k run in a race. In the National Championships last year the 10k was the first run and that will be the distance for the final run in one of the World Championship races this year.

I came through the finish line feeling terrible which is exactly the way I want to feel every race. Leave it all out there…I gave everything my body and mind had to offer on this day and that’s all I can ask for. The result is an outcome of all the training, preparation, race day execution and who shows up to race. I can control the first three and that’s what I focus on. I’ve made a couple tweaks to my training this year that are paying off and my nutrition (plant power) has been spot on fueling my energy to be stronger and faster than at any point since starting this multi-sport adventure five years ago. I’m striving to keep my biological age as young as it can be…yay!

From the preparation aspect, while I was on the bike I was consciously thinking how I just rode in those miserable conditions on the same road three weeks earlier. That gave me a lot of confidence handling my bike while going all out and I knew it was giving me an advantage or that’s at least what I was thinking.  If you are thinking it is giving you an advantage in a race that’s better than thinking anything negative. PMA – Positive Mental Attitude as John Joseph would say…

This race was very special to me. Since Morgan began attending FAU I have competed in this race each year with her coming to cheer. It really can’t get any better for me to have my daughter support me at a race…absolutely priceless. With Morgan graduating this August and beginning law school out of state this will be the final Las Olas race she will be supporting the dad. To have a great race day and win overall was icing on the cake…

I finish with a few things to consider if you are preparing for an important race or goal: