No doubt you can be healthy while traveling. A little preparation and flexibility goes a long way. This weekend I traveled to Birmingham, Alabama to watch Morgan compete at the Conference USA Indoor Track and Field Championships. It was my first opportunity to see Morgan since the Christmas Holiday break so I looked forward to this trip tremendously.

Last year I made the same trip and wrote about my weekend incorporating healthy actions in the blog, Preparation When Traveling. In this post I will share my efforts to add health to my weekend and a few crazy mishaps Saturday morning.

I did a lot of preparation for the trip but overall it wasn’t that time consuming. I reviewed Morgan’s race schedule and location first. She was racing mid to late afternoon both Saturday and Sunday so my plan was to do conduct my run and bike training in the morning hours. I found a place to run and ride, Oak Mountain State Park, which was about 25 minutes south of the race facility. That dictated where I found my hotel.

I packed food to cover my nine hour drives each way, nutrition for my workouts, and cereal and fruit when I returned back to the hotel each morning. I knew I would also make a stop or two at a local grocery store to get anything additional. I lucked out as there was a Whole Foods Market around the corner from my hotel.

I packed extra training gear as the weather looked mixed with relatively cool mornings and rain chance each day. Final preparation was to get one last training ride in Friday morning before heading to Birmingham.

I packed the truck and made a quick stop for lunch at Chipotle. Along the way I snacked on grapes, bananas, apples, carrots with hummus and a peanut butter sandwich. The ride went as well as it could making it to Birmingham in under nine hours. I had dinner at Whole Foods and got to bed.

I had to start the day early as I was going to meet Morgan at 11:00 am for lunch prior to her race later in the day. Working backwards I figured I needed to start my run at 4:00 AM. That may sound bad but I try to keep my body clock on Eastern Standard Time so it would really feel like 5:00 AM. I got up slightly before 3:00 AM and this is when the craziness of Saturday morning began. I made two trips to the car with my gear. The first one went well. When I was walking out of the hotel with my bike to leave it was pouring rain.

I left the bike under the covered area, ran to the car, and drove it back to load the bike. I checked radar and it looked like the rain was going to pass through quickly as I expected. I knew I was going to face this possibility and packed accordingly. With all my gear and nutrition packed I headed to Oak Mountain State Park.

As I was driving on the interstate in a steady rain for just a few miles, my driver side windshield wiper flew off the car! It had been on for at least a year so I had no idea why it went off at this point. Anyway if you had ever seen the movie, Ace Ventura, where he had his head out the window to see where he was driving, that’s what I looked like but leaning into the middle of the car to see through the window where the passenger side windshield wiper was still working. Luckily I only had a few miles to go and made it without too much of an issue.

I knew I there was a possibility of trouble getting into the park that early so my plan was to park outside and figure out my path when I got there. I found out by the Park Attendant that I could not run or ride in the park prior to 6:00 AM so I ran my 12 miles through the town. The run went well but I could tell my body was fatigued by the long drive Friday and less than adequate amount of sleep overnight. The rain stopped right before I started running so that was great with the temperatures in the mid 40’s which was good for the run.

After the run, I changed clothes in the car, loaded the bike with nutrition and headed to the park entrance a quarter mile away. As I approached I realized I needed the extra leg tights under my bike shorts so I headed back and made a quick change. I now had three layers of tops, two bottoms, gloves, a wrap around my neck and lower face and toe covers for my bike shoes. I did forget however to apply a balm to my body to keep me warm in those conditions.

The first 5-6 miles were quite rough getting acclimated to the cold temperatures. In addition to that I was wondering why my knees and lower quads were getting so cold and realized the bike was kicking up cold water from the rain still on the road. I never really settled in on the 16 mile out and back route inside the park. It was full of turns and hills. A combination of a fatigued body and the 12 mile run prior was making this effort more difficult than expected.

With a mile left in the loop back to the car I was really struggling. Enough so that I thought to myself something was wrong. I stopped and confirmed – my back tire was flat. The change process took a lot longer than normal as I had trouble feeling my fingers. After filling my tire I ventured back to the car to ensure my air pressure was sufficient before I headed back out to complete the ride. With the down time changing the tire and my body already feeling fatigued I decided to cut the mileage short and add the miles to Sunday morning. I was beat and worn down physically and mentally…

After making it back to the hotel with toes still frozen from the wet and cold conditions and simply fatigued I was frustrated. I handled all the challenges well in the moment but at this point I was edgy. I prepared my typical morning breakfast that I packed with me not depending on the hotel breakfast bar. I made a bowl with the Engine 2 Cereal, strawberries, blueberries, banana, steel cut oats, cinnamon, honey and almond milk. That held me over till lunch with Morgan.

I picked up Morgan and we enjoyed fantastic acai bowls at a place called Juiced Up Essentials. After lunch I drove Morgan back to the team hotel adjacent to the arena. I parked in the arena lot and took a brief nap before heading in. Even with the nap I never felt fresh Saturday knowing I would need to get a good night’s sleep going into Sunday.

Morgan raced the one mile distance and finished with her second fastest time in the event. With Morgan racing again on Sunday we found a very healthy option to eat Saturday night for dinner at the Falafel Cafe. I dropped Morgan off at her hotel and then my priority was sleep and recovery. That I did very well…

After calculating the mileage left to bike for the week by cutting my miles short Saturday  I had 42 miles in front of me. The forecast for the morning was a bit warmer than Saturday morning at 50 degrees with very little chance of rain. I woke up and felt somewhat refreshed, much better than Saturday morning. I remembered to apply the balm before I left the hotel too so already I was in better shape for this workout than Saturday.

I parked in the same spot outside the park, loaded the bike with nutrition and headed in. As soon as I got inside the park it started to rain…ha! Only a couple miles in with the rain kicking up from the front tire my lower body was completely soaked including my socks which felt like a wet sponge. The rain stopped quickly and even though I was now wet and a bit cold I felt fantastic. My body recovered with much needed sleep. I had a great hard ride completing the 42 miles and hitting my weekly mileage goal. According the my watch I also set a personal record with most ascent on a ride. What a different feeling leaving the park on this day. I felt fantastic!

I got back to the hotel, had my cereal, and headed to pick up Morgan for lunch. We found another fantastic healthy restaurant, Kale Me Crazy, where Morgan had a pre-race smoothie and I enjoyed another acai bowl. I then dropped Morgan off at her hotel and I parked at the Starbucks adjacent and took a 30 minute nap. Wow!!! I woke up refreshed and ready to go. I went into Starbucks and worked on a couple training plans for the upcoming week and then headed to the meet.

Morgan ran the 3k and finished seven seconds off of her personal best time. She had two good days of racing. We watched the final events of the meet and she attended her team meeting. I headed back to Starbucks before we headed out for dinner. We craved pizza after the race and she found a fantastic option, Slice Pizza and Brew, near downtown Birmingham. In addition to dinner and not having a competition on Monday we indulged ourselves by finding a dessert option at, Cookie Dough Magic, where we enjoyed a vegan cookie dough scoop. Morgan found all of the restaurant options using Yelp. She always scores when looking for places to eat.

What a fantastic weekend! With a bit of planning, figuring things out in the moment, and being flexible it’s possible to have an incredibly healthy weekend while traveling. I didn’t miss a workout, ate healthy, and got to spend a lot of time with Morgan.

Now for a Monday morning run, cereal and a long drive home… 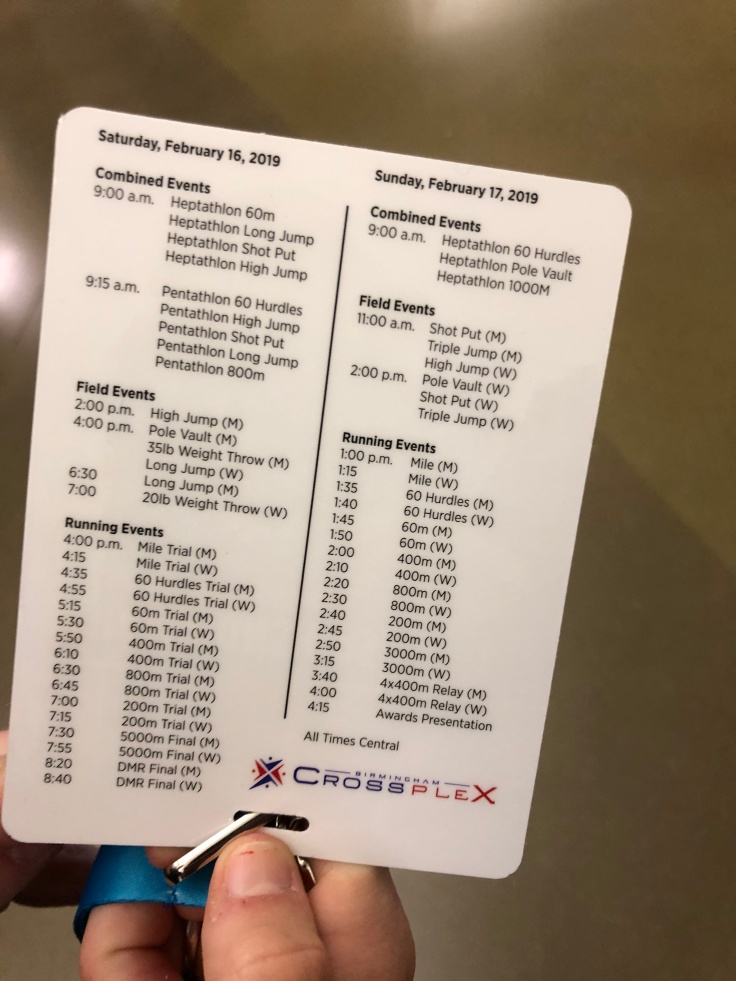 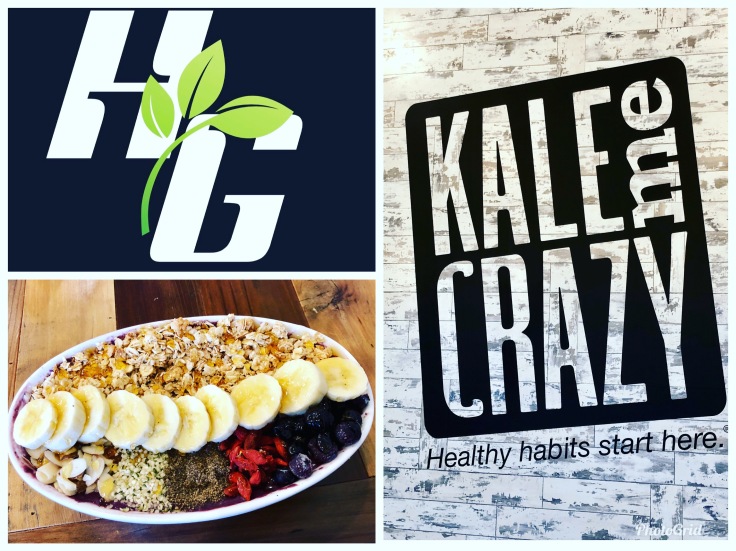 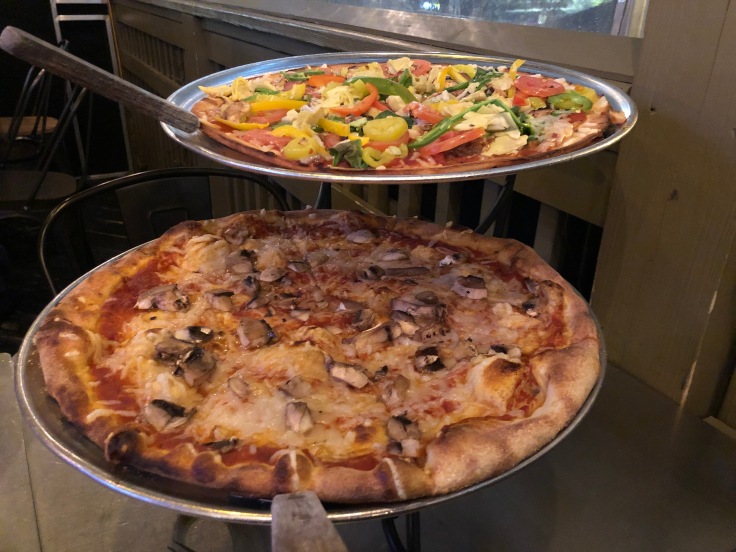 One thought on “Traveling Healthy – Birmingham 2019”