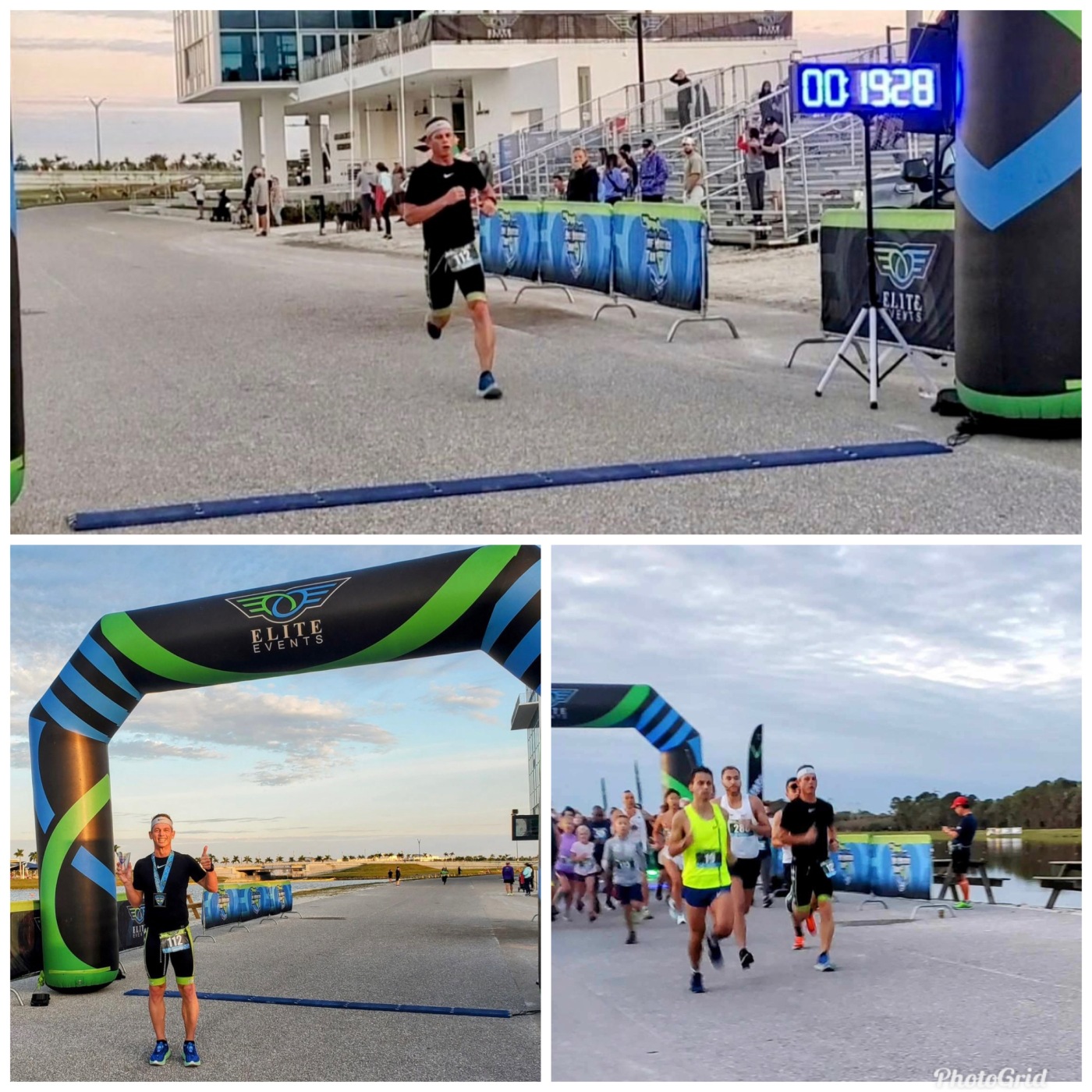 I often coach to and personally race to a phrase I use stating, “Give Yourself a Chance,” and this came into play in a great way Sunday morning as I raced at the Sarasota West Coast Half Marathon & 5k. Here I will share my experience racing the 5k distance on a cool Florida winter morning.

This race was my second run race in my winter season and three weeks after racing at the K9s United 9K for K9s where I also ran the 5k distance. I use my run seasons to prepare for the upcoming duathlon seasons as it gives me great data for targeting my run paces. The run distance in the duathlon races I compete in include 5k and 10ks so this work is critical for me.

My goal for this race was to run 19:30 or faster and at minimum, faster than my 19:43 time three weeks earlier. I felt ok during warm ups with my legs not feeling as fresh as the previous race but that was just one data point. I did have a few more weeks of work in me so I knew that would help out. The temperature was about 58 degrees, a few degrees warmer than expected and at the K9 race but still great for a 5k.

After the gun went off, we shot out roughly 75 yards where we had a hard right turn and up a pretty good hill. Then we took two hard left turns onto a small bridge with another slight incline. I knew I had to be smart early and not blow my legs and that’s what I did. Looking back post race, I wouldn’t change how I attacked the first quarter mile through that stretch. After another mini footbridge we then headed straight out for about a mile hugging a body of water used for skiing. It was flat and a nice setting. I settled into my pace and at mile one I was four seconds slower than my mile one goal pace.

At that point I didn’t feel bad, but my legs were not feeling fresh either. I was working really work hard and harder than the K9 race at that point. I kept my mile two pace under my goal pace for that mile and I was pleased. At about 1.75 miles however I began suffering in a pretty good way to keep at that pace. That’s when I started using the phrase, “give yourself a chance…keep fighting.” You never know what can happen if you fight as long as you can and that kept me going heading into mile three.

As I got into mile three my pace began to slip and I fought to bring it back several times and the suffering continued to grow. I broke the mile into quarters and attempted to cut into the high pace I started within the mile. I did up to a point but around 2.6 miles I was at the point where I was thinking the minimum goal was now in jeopardy. I used the phrase a few more times and kept thinking the couple climbs I had to start the race would be downhills going into the finish. At a quarter mile out, at the top of the mini bridge, I looked at my watch one last time and it wasn’t good. I used the momentum of the downhills to get some pace and motored to the final left turn where I saw the clock and I thought it showed 19:08.

I never looked at it again as I just focused on driving my arms and legs to the finish, thinking I had a shot, and that I did crossing the line at 19:29. It was so miserably great!!! All the suffering paid off! Executing the mantra paid off! I fought like hell to give myself a chance on this day and I got my goal. Icing on the cake I finished 4th Overall and won Masters (fastest over 40 years old). I was extremely happy with my mental game and race day execution. It’s another great mental note to know when you don’t have your A game physically that you can still make things happen. Give yourself a chance… I have to get faster however and that pursuit continues tomorrow.

Thank you Lauren for getting up at 4:00 AM, traveling with me, and cheering me on through the finish. That was another secret weapon I had going for me…