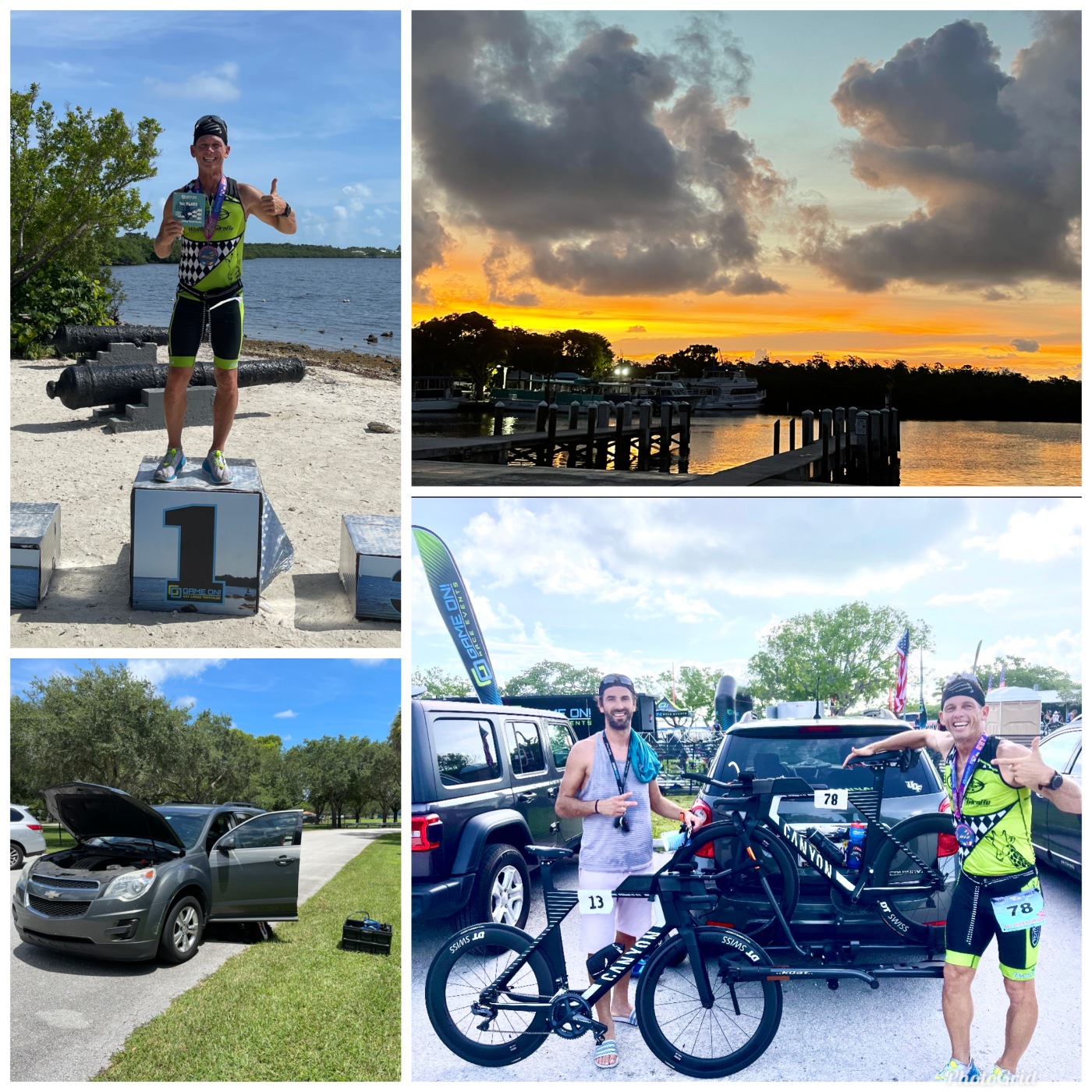 I have been to the Florida Keys twice in my life and I’ve been trapped each time with car issues. The latest was yesterday and today’s adventure after competing in the Game On! Olympic Distance Duathlon in Key Largo. Here I share my race experience and the Keys’ curse on my car that transpired on my way home to Safety Harbor.

Saturday morning started out great as I pulled into the John Pennekamp Coral Reef State Park in Key Largo and was greeted by a gentleman named, Llija, pronounced like my great friend Elia Luti. He had a strong accent and noted he was Serbian. He actually reminded me of Elia from Italy. He told me I had a nice bike and when I asked what he was riding he showed me around the corner. It was the same as mine and we had a good chuckle. We then shared a bit about each other’s backgrounds and he was just getting back into racing so it was great to help where I could. It is amazing how this community breeds community. We chatted throughout the morning, shared our race stories and wished each other well going forward. Very cool…

For my race, I was running 1 mile, biking 24.8 miles, and running a final 10k (6.2 miles). I felt ready but didn’t have a great race last time out so I was really looking for increased fitness. While racing in Key Largo in the summer, being fitter and slower was certainly a possibility. It was 84 degrees with a feels like temperature of 93 degrees at race time…love it!

I was really pleased with my first run. I was under goal pace by a good margin but felt really good so I went with it. I led the run going into the bike leg. I was working a bit too hard for the first eight plus miles on the bike so I pulled back on the effort knowing the 10k final run was coming in very hot conditions. I led after the bike and felt in control of my body (conditions). My upper hamstrings were extremely tight coming off the bike and for the first half mile run. My pace struggled simply trying to get my legs to cooperate. Then I loosened up and settled in nicely.

After three miles I was working hard to keep pace but still felt in control and knew mile four was the critical mile. I hung in without losing pace and when I completed four miles I knew my body was going to have enough gas to make it so I picked up the pace just a tad. I sprinted through the finish for the win and really happy with my effort and fitness. I was slower on my final 10k than normal but that was simply due to the conditions. It’s so important to adjust plans, paces, goals, and fueling when weather can have such an impact.

Then, the real adventure kicked in. After stopping to get a bite to eat in Sunrise I was approaching the highway entrance ramp when I began receiving several warning indicators on my dash board. I lost power steering and then power to the car. I pulled over, got it to start again, tried driving again, and one block later I was on the side of the road and this time the car was done. The next 8 1/2 hours was spent on the side of the road, in a parking lot, running 3+ miles to the dealer so I could meet the tow truck driver as I could not ride with him (COVID-19 protocols) and biking to and from an auto parts store attempting to fix symptoms. It was hot…and I was fried by evening. I finally gave in and biked to a hotel a couple blocks away.

I have so many Murphy’s Law stories from the day bleeding into today it’s too long for this post. It was one crazy 28 hour period before my car was in the same spot getting back on the highway home today but I am so thankful for having my bike with me so I could get around. It was an incredibly frustrating experience after a good race experience but I know in the grand scheme of things it’s nothing. It’s just a car and inconveniences. Last week’s accident of good friend Leo Briceno certainly puts anything into perspective. Live life, love and give to others, and appreciate the time we have with each other. Life is short…