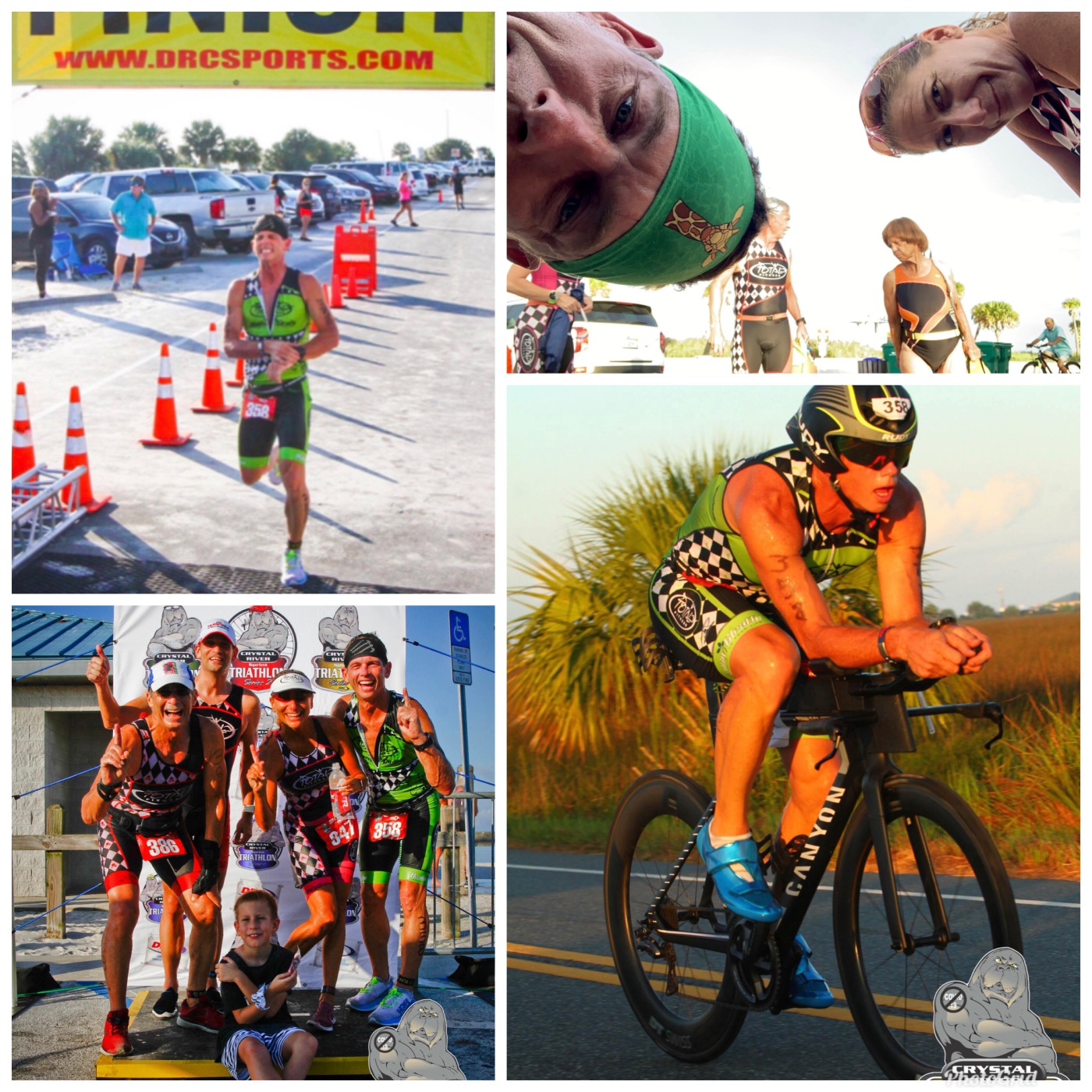 There are so many factors that go into a race performance it’s no wonder how someone can have two significantly different results racing the same course three weeks apart. That’s what I experienced Saturday as I raced the second of a three race series via the Crystal River Triathlon – racing the Sprint Duathlon.

Three weeks ago on September 5 I raced in the first of the series and my day simply sucked as I described in the blog, A Laboring Tune-Up Within a Great Healthy Weekend. Going into this race week I was doing things a bit different with a great sense of urgency as this would be the final tune-up prior to the USAT Duathlon National Championships October 17.

One of the aspects I was focused on was finding some relief for an issue I have been dealing with much of this year – a pain in my butt that resurfaced in a really bad way during the September 5 race. Starting the second run, coming off the bike was quite painful and slowed me down in a grand way. Since the race I had increased my commitment to targeted exercises and practicing yoga.

I also saw a new doctor, Dr. Mike Abenoja, Thursday of race week. We had a great discussion about my issue and he gave me immediate treatment with lots of homework. One of the humorous comments he made when assessing me was, “you are really tight!” He was referring to my hip and upper leg regions. I responded by saying, “wow, this is the most elastic I’ve been in a really long time!”

With all the yoga sessions, stretching, and tapering a bit for this race I felt as good as I had in that region in a while…ha! “All relative” he went on to explain being with the amount of cycling and running we do in this sport it is normal but we need to keep up on maintenance or increase the risk of injury. I left the session encouraged about the path ahead and hopeful the treatment would also alleviate some of the pain on race day.

Also on Thursday I found out the upcoming national championship was canceled due to the state of Arizona pulling the permits to host the race. I was extremely disappointed the race was canceled as this was the Super Bowl race for me still left on the calendar driving my training. There is still some small hope the long distance national championships will occur in November so I am transitioning my training plan immediately but first up was the race Saturday.

I had a good week leading up to it. My body felt fresher than three weeks prior, more elastic with all the yoga and doctor treatment, and my mind was dialed in. I definitely had a chip on my shoulder to race smarter and faster than the first race. With these factors I was confident I would have a better race with one variable I didn’t have control over and that was how my butt would respond coming off the bike into the final run so that aspect I would deal with in the moment.

I have never competed at the same venue in consecutive races but in this case it worked out great as I could compare apples to apples in terms of my efforts with the weather being very similar. The first run was two miles and my goal was to beat it and not fade in the second mile like I did in the first race. I executed part one well as I came in 26 seconds faster (13 seconds per mile). Difference here was I felt like I had the endurance and drive in my legs to finish the second mile strong where I was gassed and hanging on in the first race.

I hopped on the bike and through the typical first two miles or so struggled to settle in. Once I got my legs and breathing working together I felt stronger and stronger as I went into the 15 mile ride. When I was coming in I thought I had at least matched what I did three weeks earlier or maybe had a bit of a better effort but at this point it didn’t matter. I was simply focused on the moment and getting ready for the transition to the final run. My bike split ended up being 42 seconds faster than the previous race.

When I jumped off the bike and began running into transition I felt some discomfort but not the extreme pain I had felt in the previous race but it really didn’t kick in until after I dropped the bike off and tried to exit transition so I still had that test ahead. After I racked my bike and put my shoes on, stood back up and began to run out…the make-it or break-it moment…

Although I had some discomfort, it was not what I experienced in the last race and earlier in the year. I’m not sure if I was overjoyed at this moment as I was still laboring through a hard race but I was greatly relieved and knew the tightness and discomfort in the region would only get better as I got into the final run.

Trying to find my early pace I had a competitor in my age group but racing the triathlon pass me maybe a tenth of a mile into the three mile final run. I was leading the duathlon but thought this could help me continue to press if I could keep him within a reasonable distance. So I kept doing my thing, running my effort and pace and after about a half mile I began to close the gap. Somewhere around the 3/4 mile mark I passed him. My pace was picking up. I was working hard but under control.

At the one mile mark I grabbed a bottle of water from one of the volunteers and emptied it on top of my head to cool off. I didn’t even take a sip…all to help with the heat as it was picking up and the humidity was above 90%. Unlike the first race I felt like I was driving through the finish and not in survival mode. I got faster each of the three miles finishing 50 seconds faster than the first race second run and 1:53 faster than my overall time.

As I was approaching the final steps to the finish line my stride eased up resulting in my hamstrings to tighten up into a double charley horse and in a split second after crossing the line I was on my back trying to stretch them out…check out the photo of me going through the Finish Line…funny…funny now. One attempt to get up found me on my back again with another round of charley horses. I finally got up, got some fluids down and then went into cheerleader action for our other racers.

It was a rewarding race. I had my mind and body ready and my butt responded in the transition moment. It was such a relief and a boost of confidence the treatment and other activities made a difference and to continue on the path with Dr. Mike going forward.

Post race through Sunday morning I found myself a bit flustered with the national competition cancellation. For the two days since the announcement I was really focused on this race so that helped a bit to deal with but it continued to be on my mind resulting in me not being motivated for a Sunday morning workout. That is a rarity but was what I was dealing with on this Sunday morning.

I got up really early and was moping around getting ready to head out when I quickly thought – I’m not going to let this impact my entire Sunday so I am going to take action to set my mood…one of my favorite phrases from one of my favorites, Rich Roll, “action sets mood.” What would set my mood better than to be with the team…

I loaded up the car and headed to Fred Howard Park in Tarpon Springs. The team was doing a virtual race as the Tarpon Springs Triathlon had been canceled a week earlier. I was not ready to compete in a virtual race but wanted to participate so in I was. I did a warm-up by myself as all of the other team members were doing the triathlon race. For the duathlon race it consisted of a 1.55 mile run, 10 mile bike, and a final 3.1 mile run.

After the warm-up I was thinking this is going to be quite rough as I was extremely tight and a bit sore from the Saturday race. The first run felt worse than Saturday as my legs felt like bricks but in the end they began to open up and I wasn’t too far off my Saturday effort. The body continued to adapt through the ride and final run and it ended up being a really good effort. Coach Celia Dubey also added in another ride and run after the virtual race for us to recover. So although it sounded bad, when we were finished it was great and my mood was fantastic – action sets mood. Hanging with the team definitely helped my head in a great way.

I spent some time Sunday recalibrating my training plan with the change and we will see if the long distance national championship in November happens but until it’s cancelled I will prepare like it is a go.

There are so many hurdles we all deal with in life and competition. It’s not easy and flat out sucks sometimes but we need to find ways to work through it and come out the other side better for it. It’s constant work and makes us stronger people. I know these circumstances, hurdles and failures have made me a better person, competitor, and coach. Thank you to all who help me through these hurdles and bring so much joy to my life.

One thought on “Racing Deja Vu with a Chip”