We face adversity everyday in some manner. How we deal with it can either sink us or make us stronger. Today I’ll share a few experiences with adversity I have been dealing with over the last few weeks and what I’m attempting to do to work through it.

First of all let me share I’ve dealt with adversity well, OK, and terribly over the years across many different facets of my life. Each challenge brings it’s own unique elements and I simply try to get better and more consistent when facing them. I attempt to learn what I can from each experience and make the best of the situations.

My most recent battle is dealing with a knee injury that developed just over four weeks ago. Coming off of the USA Duathlon National Championships I took a break from the heavy volume training I had been logging. Even with the light work load pain in my knee developed.

I raced the bike portion of the St. Anthony’s Triathlon and following the race the knee felt a decent amount of discomfort. I spent some time thinking about the growing pain, how it could have developed and what to do next. I had never experienced pain in that part of the knee before. I had knee surgery on the other knee and that was a completely different feel.

After reflecting and talking with a coach I knew it initiated from the bike. The next thing to consider was what to do next. Two weeks ago I considered the following things:

I determined to take the next week with limited bike workouts and use the extra time and energy to swim. The week ended with mixed results. The dedication to swim was a success in completing several workouts. The Sunday bike ride from Boca Raton to Ft. Lauderdale and back finished terribly. I dealt with pain on the ride vs. discomfort. It was the worst it had been to that point.

After that I decided to go another week with limited bike workouts and continue the extra swim time. I also decided to pull pack on my early week runs to see if that would help. I then went out for a Thursday night ride which OK so in my mind I was thinking it wasn’t getting worse…that’s progress.

The weekend came and I headed to Charlotte, North Carolina to watch Morgan race in the Conference USA Track & Field Championships. The event was held on the beautiful campus of the University of North Carolina Charlotte (UNCC). I found they had a beautiful trail that went through the campus and continued off campus for several miles. That would serve as my route for my long Saturday run and short run Sunday.

The Saturday run went OK. It was my longest effort in a couple months and I mixed in a bit of speed. The knee felt tight with some discomfort but I didn’t feel like I was making it worse with the effort. The remainder of the day it felt better than I expected, especially after the long distance. With that in mind I was optimistic about taking the bike out on Sunday morning.

I brought the bike with me on the trip with the dual purpose of continuing my training plan and also being able to bike in another venue. I loaded up the bike with my fuel and off I went on my 40 mile training adventure. After the first 2-3 miles of warm-up I thought I may be in jeopardy as the pain was back in a sharp manner. I hoped it would ease up so I went another couple miles before determining it was not getting better so I turned around and headed back to the hotel.

At this point the adversity really sunk in. I was pretty disappointed with a lot of things going through my head…. how much will this set me back with the missed effort? I have a race next weekend….Triathlon Nationals are now three months away….

I drove one mile to the campus and started my run on the trail. After one mile I thought to myself, “this better get better.” I felt discomfort but not pain and there is a difference. I have learned when we feel pain we should stop. When we have discomfort we can continue to explore. I am generalizing here and whenever in doubt I suggest being cautious and seek advice from a doctor or expert.

On I went to mile two and a half and it didn’t change much so I decided to turn around and head back to where I parked in case it got worse. I didn’t want to be far away for a long walk back if I had to stop running. When I almost got back the discomfort wasn’t worse so right then I was decisive. I thought to myself, “I am going to make the most of this morning and stop feeling down about it.”

A couple things came to mind. I thought of Boston Marathon winner, Des Linden, who’s motto is, “Keep Showing Up.” It was pretty simple on this day. I at least wanted to show up and for me that meant give it a real go. My mindset flipped from being in doubt to being deliberate with my plan. I decided I would run another six miles, three out and three back on the trail and I would do it listening to an audio book from John Joseph titled, The PMA Effect, standing for Positive Mental Attitude. I am a huge John Joseph fan and listening to his voice reading his own book I knew would give me an extra boost and that it did.

Now the adversity in the adversity…is that possible? Charlotte was hit with continuous rain showers the day prior and overnight. That resulted in a few spots of the trail being very slick due to red clay being washed over.

After getting my mind in training attack mode I was in a good rhythm and my knee was feeling OK and I think a bit better simply with my positive mind set for the remaining miles. As I approached the slick spots I went over cautiously and then picked up my pace again. I completed the three miles out and headed back. I was feeling good at that point that I was giving the effort, running a decent pace, and that I didn’t pack it in for the day after the bike.

Then came a left 90 degree turn on the trail that I didn’t note to myself was slick on the way out. As I approached I slowed down and began to turn cautiously but the ground was like ice. My left leg completely slid to the right and down I went hard landing on my left knee, hip, elbow, wrist and shoulder. I found myself laying on my back in a thin layer of clay out of breath. I remained in that spot for several seconds considering what just happened and then tried to identify what was hurt. The first thing I felt was my knee and elbow as they were burning. I opened a few nice cuts on both. (Picture offered below of the knee but be careful…if clay makes you nauseous, don’t look…)

I sat up and then the real test – standing up. This would be the assessment to how bad the damage was. I stood up and knew if I spent anymore time thinking about it, it would simply get worse so I quickly tried to get as much clay off of me as possible. That didn’t prove successful so I started to run. At that point I was 9.25 miles into the run with another 1.75 back to the truck. I picked up the pace and during the next .75 miles I thought to myself, “what am I supposed to get out of all of this?” My right knee was gimpy on the bike and now I just bruised and cut the heck out of the left knee.

But I was still running…

Right before I hit mile 10 with one mile left, I had a lot of feelings going through my head, mainly frustration and being pissed but I really thought about what was I getting from the experience. One of my favorite quotes from Ultra Endurance Coach Chris Hauth is, “get the body tired and then the training begins.” Honestly I think of that quote during most of my long workouts and if you are with me on any of the real long ones, you have probably heard me say it and it’s so true.

I thought about that and what transpired over the last couple weeks and I took off on a mission for the last mile. I was going to press as hard as I could. All the cuts and bruises went out the window and my right knee was doing OK so I continued to press. The last mile, mile 11, was the fastest of the day by 40 seconds.

When I finished I was on top of the world. I was dirty but made the most of a bad situation. It’s amazing how much power the mind has and what we can do to make things happen. I know in November when I’m at the Duathlon Long Course National Championships in Miami I will look back on this morning as being a significant day in training. This is what it’s about. Test the body, test the mind, deal with it.

These are four things I offer to you dealing with adversity:

For me, I will continue to work and re-work steps 2-4 until it is resolved. I’m hoping that is sooner than later. I’m not the most patient person dealing with my own injuries so I am really focused on being smart with step 3. 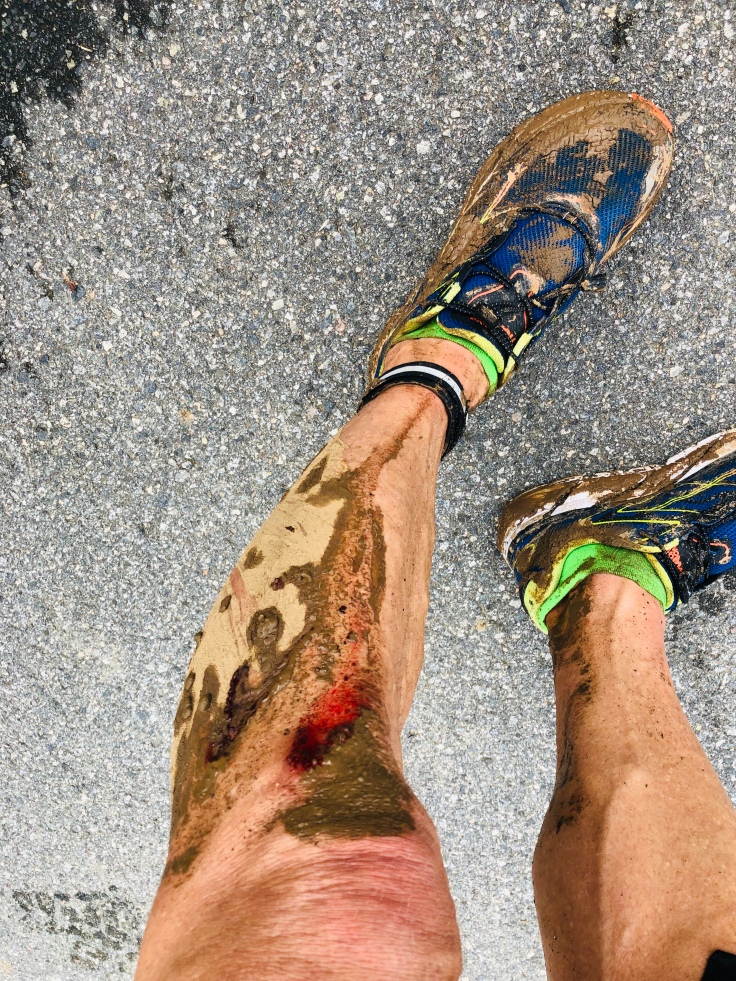 One thought on “Manufacturing a Silver Lining”